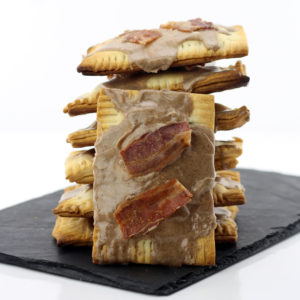 So this mom blogger Everything Erica that I follow on Instagram keeps making homemade Pop-Tarts in her air fryer that are apparently healthy — or at least healthier than regular Pop-Tarts — because she uses Greek yogurt as one of the ingredients in the dough.

Now I can’t speak much on the health part of it since I clearly know absolutely zero about eating healthy, but I do know that they always look pretty damn good. Plus, ever since my wife got me an air fryer for Christmas I’m always looking for new things I can make with it, so I figured I’d give the homemade Pop-Tarts a try!

I think Erica filled her Pop-Tarts with some sort of low sugar strawberry preserves, but strawberry preserves obviously aren’t going to fly around these parts so I decided to pack mine with peanut butter, bacon and banana slices. Sort of an Elvis style Pop-Tart if you will….

Since my filling wasn’t exactly healthy and the maple bacon glaze and additional bacon that I decided to top them with wasn’t either I decided to just skip making my own dough with Greek yogurt and use pre-made pie crusts instead. Much easier…. Oh, and since I have no patience at all and I’d only be able to fit two or three Pop-Tarts in my air fryer at a time I skipped that part too and just baked them in the oven instead. At least I didn’t deep fry them though right?

So in the end I guess these are really nothing at all like Erica’s Pop-Tarts and I’m not any closer to eating any better or fitting into my old size medium t-shirts that have been packed away in tubs in my basement for the past ten years hoping that at some point I’d be able to fit into them again, but at least they were really, really good! 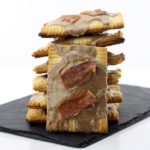 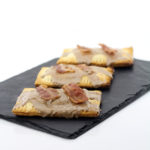 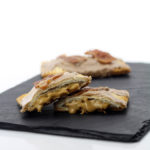