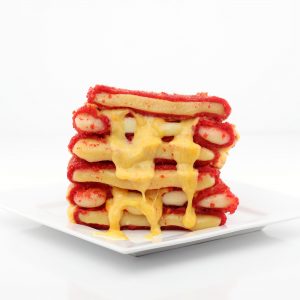 A few weeks back Jessica Tighe from CBS 58 here in Milwaukee stopped by my house to do a story about DudeFoods — which you can check out here — and specifically requested that she and I make something new and ridiculous, so here’s what I came up with — a sandwich that has deep fried Flamin’ Hot Cheetos breaded squares of cheese for the bread with Flamin’ Hot Cheetos mozzarella sticks and melted Cheddar in the middle.

When I originally made the sandwich with Jessica we used Gruyère for the two squares that became the bread, but when I re-made it for this blog post I used apple smoked mozzarella just because I was out of Gruyère the second time around. They both turned out equally as awesome and I’m sure that any cheese with a low melt point like Gouda, Fontina or Colby would work just as well.

The same goes for the middle of the sandwich, any melty cheese will work, I just went with mozzarella and Cheddar to get a bit of variety with the sandwich. Yes, the guy who breads almost every single thing he makes in Flamin’ Hot Cheetos needed a little variety… I understand how ridiculous that sounds….

So Jessica, thanks for stopping by, thanks for hopping in the kitchen with me and most importantly, thanks for actually eating this ridiculous sandwich. And for eating the Bacon Weave Taco that we made. Oh, and the spaghetti noodle bowl that we made as well….