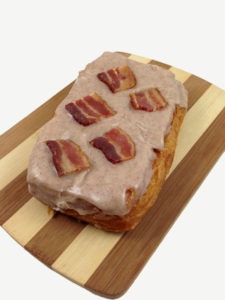 By now I’m sure you’ve all heard of the Cronut — the half croissant, half doughnut created by Chef Dominique Ansel for his bakery in New York City.

Although its creator states that the Cronut is more complex than just fried croissant dough, without knowing his proprietary recipe the easiest way to make your own seems to be to use layered crescent roll dough.

While everyone else seems to be focused on re-creating the Cronut exactly as Dominique Ansel makes his, I opted to create a Cronut hybrid of my favorite doughnut – the Long John! Ladies and gentleman, I give you the Crong John!

I started off with a couple rolls of Pillsbury Crescent Roll dough. Each can of crescent rolls contains eight triangles of dough, which is enough to make one Crong John. What you want to do is use two dough triangles per layer — so you end up with a rectangle — and then stack the four layers of dough on top of one another.

When stacking your layers you’ll also want to make sure your dough is sticking together, because you don’t want it separating when you deep fry it, but you also need to make sure you don’t pat it down too much because if you do it won’t end up as airy when it’s finished.

The next step is to cut your dough into more of a rectangular shape. I cut mine to be about 1 1/2″ wide and 6″ long. The dough will expand a decent amount when you fry it and my finished Crong John ended up a bit larger than a traditional Long John, but with how delicious it was I was totally cool with that. Once you’ve got your dough cut you just need to drop it in some 375° oil until it turns golden brown, which for me was about a minute on each side.

Now, this being DudeFoods you didn’t think I was going to settle on a simple vanilla frosting did you? No way! Instead, I combined 1 1/2 cups powdered sugar, 2 1/2 tablespoons milk, 2 teaspoons. maple syrup, 1 teaspoon  cinnamon and 1/2 teaspoon maple extract to create a maple glaze. Oh, and then I added some Maplewood Smoked Bacon that I recently got in the mail from BaconFreak.com.And thus, the Bacon maple Crong John was born!

After trying a doughnut made out of crescent roll dough I seriously never want to eat a regular doughnut ever again. It’s insane how ridiculously light and fluffy these are. The only thing that stopped me from eating more than two of them was the fact that I ran out of dough. Even then, I contemplated heading back to the grocery store in the pouring rain to buy more, but sadly they were already closed for the night.

Oh, and if you’re looking to buy some of the same bacon I used to make my Bacon Maple Crong John BaconFreak.com has a 10% coupon code that they’ve given me to share with you. Just enter BACONDF at checkout and you’ll save 10% on your entire order! 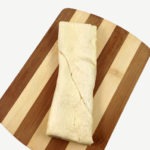 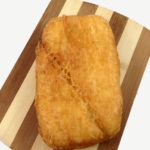 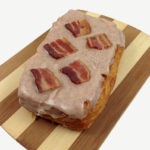 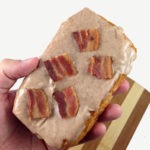 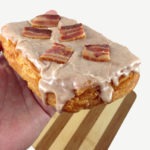 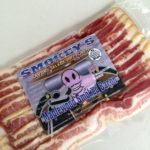