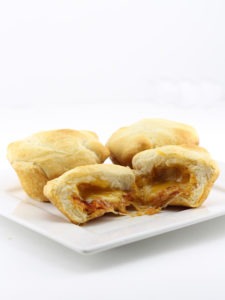 I believe it was Alexander Graham Bell who once said “When one door closes another door opens.” Never have those words rang truer than recently when I made some biscuits that were stuffed with fried chicken and coleslaw. They were absolutely delicious, but none of the pictures I took of them looked that great so I decided not to write about them.

On the plus side though, I had a bunch of leftover biscuit dough after I finished making them so I combined it with some pepperoni, cheese and some pizza sauce that I had in my refrigerator to make these Pizza Stuffed Biscuits!

To create them I took a muffin tin and lined the bottom and sides of each cup with biscuit dough. I then filled each one with my pizza toppings and then finished them off with another piece of dough. After that I just threw the muffin pan in the over at 375°F for 18 minutes, kicked back and waited patiently for them to finish baking. After letting them cool for a few minutes I sliced into one with a knife and was instantly met with oozing cheese and sauce.

What’s even better though — and this is something that happens every single time I’m working on a story for DudeFoods — is that as I was sitting on my couch watching Netflix with a plate of Pizza Stuffed Biscuits on my lap I thought of about ten more ideas that I could substitute for the pizza in these. In fact, I’m planning to make some bacon and cheese stuffed biscuits this weekend! 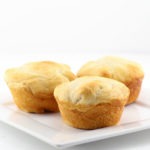 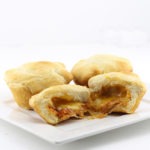 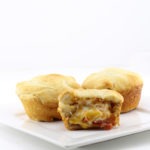