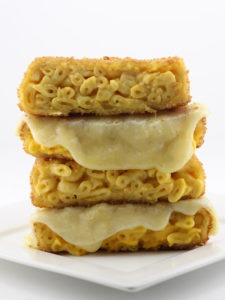 CheeseRank.com recently asked me to come up with an original recipe for their site with the only stipulation being that it contain “a lot of clearly visible melted cheese.” I’m hoping that this one will do…. I’d also just like to give a quick warning to anyone who attempts to make this sandwich — it will be messy, but it will be worth it.

I started by making homemade macaroni and cheese using Cheddar from a great Wisconsin cheese company called Hook’s. I then spooned it into a baking pan, flattened it out so it was about half an inch thick and froze it. After a few hours in the freezer I cut the macaroni and cheese into squares that were roughly the same size as a slice of bread before coating them in flour, brushing them with egg and covering them in panko breadcrumbs. The final step to get my macaroni and cheese squares ready for sandwich making was to drop them into my 375º deep fryer for about 90 seconds.

At this point I almost forgot about the whole sandwich idea completely and was about a second away from just biting into the deep fried macaroni and cheese squares right then and there, but I finally pulled myself together and realized that I had a job to do.

When it came to the cheese in the middle of the actual sandwich I once again turned to Hook’s, but this time I used their Havarti, which is a criminally underrated cheese when it comes to making grilled cheese sandwiches. Only throwing one or two slices in the sandwich like you would with a traditional grilled cheese clearly wasn’t going to cut it though, so I used six. After all, I was going for a lot of clearly visible melted cheese right?

At that point you just have to make a grilled cheese sandwich in a pan like you normally would, with the one difference being that instead of boring slices of white bread this sandwiche has crispy breaded squares of deliciously cheesy macaroni. The only bad thing about this sandwich is that it’s almost impossible to go back to a regular grilled cheese after you’ve eaten it. It would be like dining at an amazing steakhouse and then going to Applebee’s the following week and ordering the house sirloin from their 2 for $20 menu. Sure, it’ll fill you up, but it just doesn’t compare…. 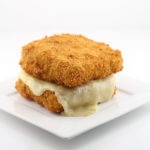 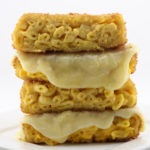