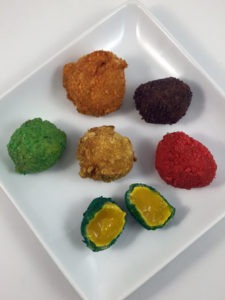 Earlier this year I backed a Kickstarter project from a company called Anova that was making a low cost sous vide immersion circulator. For those of you who have no idea what sous vide cooking is, it’s basically a method of cooking food in airtight bags at very low temperatures for long periods of time. The idea behind it is that the food is cooked much more evenly and that you can actually cook the inside of your food properly without overcooking the outside.

Well, my Anova Precision Cooker finally arrived a couple weeks ago and I’ve been using it non-stop ever since on things like chicken and steak — which it does a phenomenal job with by the way, especially the steak.

The thing I was most excited to use it for however was eggs. Why eggs you ask? Because by cooking eggs at set temperatures for long amounts of time you’re able to do things that dropping them in boiling water just can’t duplicate.

While looking for sous vide egg recipes I came across one for Sous Vide Egg Yolk Croquettes and knew that I had to try something similar. Coating the yolks in bread crumbs seemed too obvious though, so I decided to stick with a breakfast theme and coat mine in crushed up Froot Loops cereal instead.

My other idea was to bread them with diced pieces of bacon, which after how delicious these turned out I definitely plan on attempting very soon. Josh from Culinary Bro-Down also did something similar, but he breaded his with Doritos, and by the looks of his photo I’m guessing that they were just as amazing as my Froot Loops Breaded Sous Vide Egg Yolks were.

Seriously, these things were great. I’ve never tasted such a delicious egg yolk before. Cooking them at 148° for 45 minutes gives them a perfect, super rich taste. The best way to describe it — and the description I’ve heard most often — is that the egg yolks end up almost custard-like. They were so good in fact that it’s actually difficult to go back to eating regular eggs after trying these sous vide egg yolks. From this day forward I’ll probably just have to factor an additional 45 minutes into my routine every single morning so I don’t ever have to go a day without eating these again. 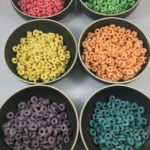 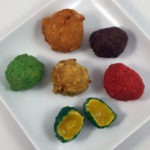 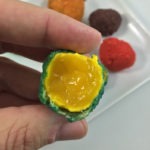