I recently spent 30 minutes digging through my kitchen cabinets trying to find some cookie cutters that it turns out were pretty much sitting right in front of me the entire time. On the plus side, I found a box of peanut butter flavored Pop-Tarts during my hunt and seeing as how they were about to expire I figured I should do something with them.

Now, I could have just eaten them for breakfast the next morning, but the problem with that is that these Pop-Tarts didn’t have any frosting on them. Seriously, who buys unfrosted Pop-Tarts? I mean, obviously I bought this box and I’m sure I had a great reason for it at the time, although at this point I have no idea what it was. What’s even worse is that the back of the box has an ad for a version of the exact same Pop-Tarts covered in chocolate frosting! It’s like the ad was placed there for the sole purpose of silently mocking me.

To me Pop-Tarts without frosting are just garbage. I don’t understand why Kellogg’s even makes varieties of them without it. Just because they can? In the epic words of Chris Rock from his 1999 HBO special Bigger and Blacker “Yeah, you could do it, but that don’t mean it’s to be done! Shit, you can drive a car with your feet if you want to, that don’t make it a good fucking idea!” Granted, he was referring to a woman raising a child on her own and not Pop-Tarts, but I’m pretty sure the saying still applies in this instance….

So what genius idea did I come up with to make these boring unfrosted Pop-Tarts taste better? I channeled my inner Elvis Presley, whipped up a banana glaze for them and topped them with that and some bacon! Yep, Elvis Pop-Tarts!

So what should you do if you randomly come upon unfrosted peanut butter flavored Pop-Tarts? I’ll tell you exactly what you should do, you should combine 1/2 a banana, a tablespoon butter, 1 1/2 cups powdered sugar and 1/2 teaspoon vanilla, mix it up real nice like, frost those suckers with your new banana glaze and then top them with bacon. Or you could just toss them in the trash I guess, but whatever you do just don’t eat them unfrosted, because that’s just a total let down! 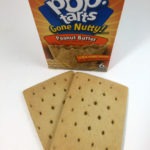 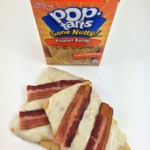 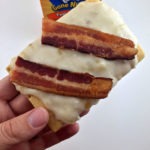