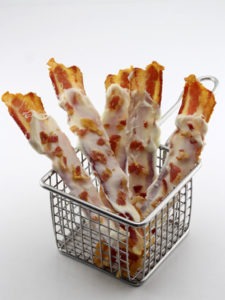 Chocolate Covered Bacon isn’t original in the least bit, but I don’t care. I came across some white chocolate in my kitchen cabinet — which I bought a while back for some other blog-related idea I had, but for the life of me I can’t remember what it was anymore — so I decided to make some. Then just to make it extra awesome I sprinkled some bacon crumbles on it as well.

Now, Chocolate Covered Bacon With Bacon Sprinkles should be pretty self-explanatory if you want to make it for yourself, but you never know. I received an email from someone recently asking me what kind of cheese I used in a grilled cheese sandwich I wrote about so I answered her question and then added “or you could just use whatever cheese you normally use when you make a grilled cheese” to which she responded that she’d never made one before and didn’t know how.

Anyway, just in case she’s reading this — what’s up Vicky! — and doesn’t know how to cover bacon in chocolate either here’s how to make it:

Step 1 – Make some bacon. Make it in a pan, in the oven or even in your microwave. It doesn’t really matter as long as you end up with some delicious, delicious bacon

Step 2 – Melt some chocolate. I just put mine in a bowl in the microwave, heated it for 30 seconds and then stirred it and kept doing that until it was fully melted.

Step 4 – Add some bacon sprinkles on top of your Chocolate Covered Bacon. I probably should have specified  — for Vicky’s sake — during steps one and three that you need to save a couple slices of bacon for this step.

So what do you do if you’ve already tried Chocolate Covered Bacon and you’re not a fan? Well, perhaps you’d be interested in Oreo Cookie Glazed Bacon, Elvis Bacon, S’Mores Bacon or even Deep Fried Doritos Crusted Bacon. Until next time, keep experimenting in your kitchen Vicky, and shoot me an email if you have any questions!