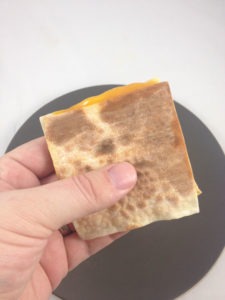 The idea of a wonton grilled cheese was actually suggested to me by a DudeFoods reader named Walter. This sandwich as you can imagine is similar to a regular grilled cheese but uses wonton wrappers in lieu of bread.

Walter describes it by saying “At the right degree of done it turns into a stretchy cheese wonderment and after more frying it becomes more brittle. Choose which way you like it and enjoy!”

Whereas he suggested using lots of butter to fry the wonton grilled cheese though I had better luck not using any at all and instead just letting the wonton wrappers harden a little while the cheese melted until my sandwich turned into sort of a thinner, crispier quesadilla.

Long story short, my grilled cheese turned out awesome and the wonton wrappers were a nice substitute for bread. With grilled cheese sandwiches I sometimes feel like unless I add three or four pieces of cheese all I’m really eating is two pieces of fried bread, but thanks to the thinness of the wontons the flavor of the cheese comes though way easier. On top of that, this is actually a pretty decent light alternative to a regular grilled cheese sandwich. You know… if you’re into that whole eating healthy thing…. Thanks for the tip Walter! 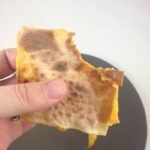 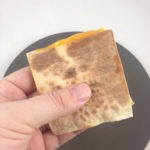 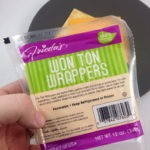