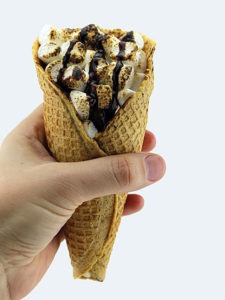 I went through a phase where for a while I was making tons and tons of stuff with my waffle cone maker.  I made a Crouton Cone that I filled with Cobb Salad, a Chicken and Waffle Cone, a Pizza Cone and even a Tacone.

Then, like every other kitchen gadget I own, it eventually got moved to one of those really high cabinets that you either need to stand on a chair or climb up on the countertop to reach. As a result I basically forgot that I even had it.

Then, one day recently as I was searching for my panini press — which is another appliance of mine that only seems to see the light of day a couple times a year — I came across it and my head instantly flooded with new ideas of how I could use it. The first of those ideas was a S’mores Cone.

I’ve seen other people just fill regular ice cream cones with marshmallows and melted chocolate and refer to those as S’mores Cones, but without any graham crackers I fail to see how you can consider calling your creation a S’mores Cone. Plus, as I mentioned when I made my Rice Krispies Treat Ice Cream Cone, regular cones are just boring.

What I envisioned for my S’mores Cone was to have the actual cone made out of graham crackers. To do this I mixed up 1 1/2 cups of crushed graham crackers, two eggs, a tablespoon of vegetable oil and a sprinkle of sugar just to make the cone extra sweet. I then spooned a few tablespoons of the mixture onto the bottom plate of my waffle cone maker, pressed down on the lid and a minute later I removed it, rolled it around a cone form and let it cool.

Ten minutes after that I filled my cone with marshmallows and melted Hershey’s chocolate and took a bite. Now this is what a S’mores Cone should be! So, to all you food bloggers out there who have been taking the easy way out with your S’mores Cones take note, because this is how it’s done! Oh, and thanks for the help waffle cone maker! I think I’ll keep you on my kitchen counter for a while and see if I can get some more use out of you!