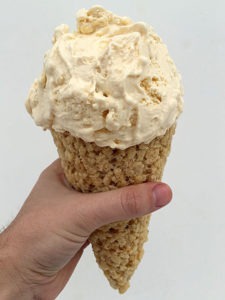 A while back I made an ice cream cone out of a giant chocolate chip cookie. Ever since then I’ve wanted to try making one out of Rice Krispies Treats as well.

Since I’ve been sitting on this idea for almost two years though I figured that somebody would have had to have done it by now right? Nope. A quick Google search only turned up junk like this where people have just filled regular ice cream cones with Rice Krispies Treats.

I don’t get it. Why the hell would you want a crappy ice cream cone that’s stuffed with Rice Krispies Treats? Regular ice cream cones suck. They’re fine packed with ice cream because that way they’re actually serving a purpose since it’s not like you can just hold a scoop of ice cream in your hand and eat it, but you don’t need a separate vessel just to eat Rice Krispies Treats. Aside from the “Oh hey, look how cute these are!” factor it’s completely pointless.

Creating the cone was actually super simple. All I did was make some Rice Krispies Treats, spoon them between two pieces of wax paper while they were still warm, flatten them into a sheet with a rolling pin and then wrap them around a cone form that I have.

The great thing about Rice Krispies Treats is that when they’re freshly made they’re super easy to form into pretty much whatever shape you want, yet at the same time they hold that shape perfectly once you let them cool a bit. After forming my cone I probably only waited about 15 minutes before I was scooping chocolate chip cookie dough ice cream into it.

The only real problem I had was that I made the cone so large that I had to use a soup ladle instead of an ice cream scoop to fill it up. If too much ice cream is the only downfall though I’d call the Rice Krispies Treat Cone a success!