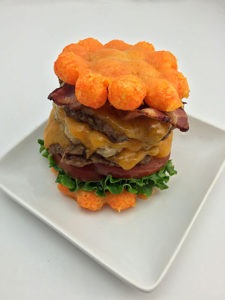 I was sitting around drinking whiskey and devouring cheese balls by the handful one night when I thought to myself “Hey, do you know what would be awesome? If I had a burger bun made from these!”

I’ll admit, I fully expected this to turn out like many of my other drunken ideas, which usually sound good at the time — and really, what idea doesn’t at least sound good while you’re drinking — but end up being disastrous in reality. Do you know what though? This one actually worked, and on top of that it worked even better than I imagined!

To create the cheese ball buns I took a glass bowl, lined the bottom with cheese balls and topped them with shredded cheese. I then microwaved each bowl for 40 seconds and used a knife to pry the buns out. Boom! It’s that easy!

Now, normally when I make burgers I spend time grinding my own meat and experimenting with different blends before finally throwing the patties on my grill, but I was in such a hurry to use these cheese ball buns that I opted to go with some full-cooked microwavable Flame Grilled Patties that I received recently from Ball Park, and since their Flame Grilled Patties are ready in about a minute I didn’t have to wait long at all!

They sent me three different varieties — Beef, Beef and Cheese and Turkey — and since I couldn’t decide which one would go best with my cheese ball bun I opted to go with one of each! So, I topped each patty with a slice of Cheddar cheese, added some lettuce, tomato and bacon and my Cheese Ball Bun Triple Bacon Cheeseburger was ready to eat!

In the end I’m glad I didn’t have to wait on the burger patties to enjoy this thing! It was amazing! I fully expected the cheese ball bun to completely fall apart when I took a bite, or even when I first picked it up, but it held together until the burger was completely finished, which I’d estimate only took me about 45 seconds.

I can only imagine that this is what Einstein felt like when he discovered the Theory of Relativity or that a similar amount of excitement filled the room when Isaac Newton first presented his Theory of Gravitation. Now, I’m not comparing myself to these two geniuses by any means, but come on, “What goes up must come down?” That shit is common sense. Figuring out a way to form cheese balls into a bun using melted cheese though, now that takes some experimentation! What do I know though, I got a D in high school science class….

Granted, I have a zero percent chance of winning a Nobel Prize for my discovery like Einstein, but in the grand scheme of things I feel like this cheese ball bun may some day be equally important to the future of society. 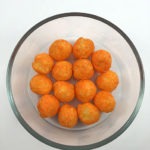 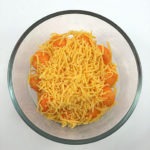 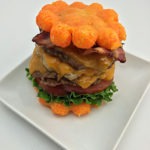 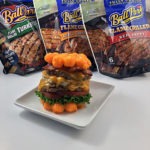 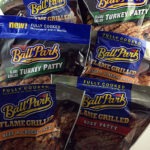