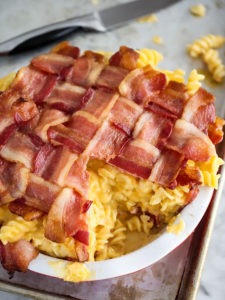 A little over three years ago I was asked to come up with a unique macaroni and cheese recipe for the now defunct 30 Days, 30 Ways Macaroni & Cheese Blog.

The premise of the site was that each day a different food blogger or chef would use a different Wisconsin cheese to create a mac and cheese dish, so for 30 days straight there would be a new macaroni and cheese recipe posted every single day.

My idea for the project — and what I still consider one of my best food-related ideas that I’ve ever had for my blog — was a Colby Jack Mac and Cheese Pie with a crust made entirely out of bacon.

The post ended up being hugely popular, and was the first of my posts that really went viral. At one point both my site and the 30 Days, 30 Ways Macaroni & Cheese site crashed just because so many people were trying to get the recipe at once. It was at that point that I also realized what a horrible hosting company GoDaddy is, but that’s a story for another time….

Since then I’ve seen tons of other food bloggers copy the recipe and claim it as their own. A majority of them even took the easy way out and only created a bacon lattice top, which in my opinion is pretty lame. If you’re going to make a bacon mac and cheese pie you need to go all out and make the entire crust out of bacon, because if you don’t you’re just wasting your time.

So why am I spending all this time talking about a three year old blog post? Because one of the things I always hated about that post — and about a decent amount of my posts since then — is that the photos that I took of the pie looked like complete crap. I guess that was to be expected though since I’ve always just used my iPhone for blog photos and back then all I had was the 3GS.

Terrible photos and all though the Colby Jack Mac and Cheese Pie is still somehow one of my more popular blog posts, but since the recipe was only posted on the 30 Days, 30 Ways Macaroni & Cheese blog and I never saved a copy of it myself it was lost until recently, when 30 Days, 30 Ways relaunched as All Things Mac and Cheese.

What’s even better is that they even remade my pie and took some legit, professional looking photos of it that are about a million times better than the original ones! I did recently splurge on a nice DSLR camera though so maybe someday my photos will actually look this great, but all I’ve really done with it thus far is take pictures of my dogs Finn and Holden. Until that day arrives though I’m just psyched to know that the recipe for the Colby Jack Mac and Cheese Pie With a Bacon Crust is back online! Want to make one for yourself? Just head over to All Things Mac and Cheese for the recipe! 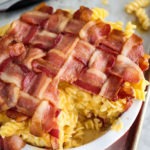 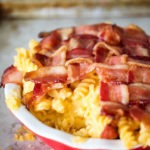 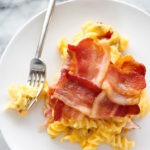