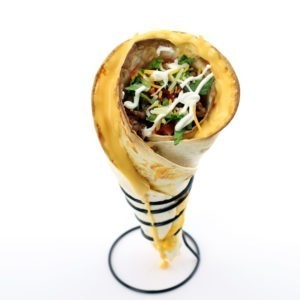 Seven years ago I made a hard shell taco cone that I filled with ground beef, cheese, lettuce, tomato and sour cream. I called it a Tacone and it was amazing.

It was the absolute perfect way to eat a hard shell taco without having the shell break apart causing all your filling to fall onto your plate, which seems like it happens every single goddamn time I eat one.

Shortly after that I came up with the idea of forming a quesadilla into a cone to do the same thing. Being the slacker that I am I never actually did anything with it though, I just added it to my ever growing list of recipe ideas without ever even attempting to make it… until now!

Now that I’ve finally made my Quesadilla Tacone — which is what I’ve named this amazing creation — I’m just mad at myself for waiting so long because I basically just spent the last seven years using boring, regular taco shells while this genius idea was just sitting in the back of my head the whole time. It seems like a total waste.

It did take me a few attempts to get the Quesadilla Tacone to work, but on my third try I finally got it right! The first time I tried to make one I just topped a tortilla with shredded cheese, added a second tortilla on top of it and rolled it into a cone. When I lifted it up to put it in the oven though all the cheese just slid down to the bottom of the cone.

After that I tried making a quesadilla normally before rolling it into a cone, which worked to an extent, but by rolling an already cooked quesadilla I just ended up with cracked tortillas that didn’t look too appetizing.

What’s also great about the Quesadilla Tacone is that you don’t even have to do a plain cheese quesadilla like I did. How amazing would a steak and cheese quesadilla cone filled with ground beef or ground chicken taste?! The possibilities are endless! 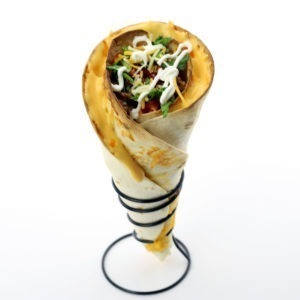 It's a quesadilla! No, it's a taco… in a cone! No, it's all of those things in one and it's delicious!
Print Recipe
Pin Recipe
Prep Time 5 mins
Cook Time 10 mins
Total Time 15 mins
Course Main Course
Cuisine Mexican
Servings 1 Quesadilla Tacone

3 Comments on The Quesadilla Tacone