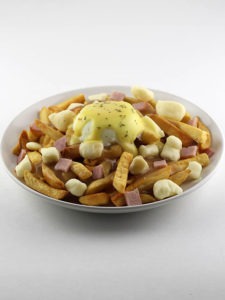 This isn’t the first time I’ve written about Eggs Benedict, or even Poutine for that matter, but until recently the thought of combining the two never entered my mind — which is a little crazy since literally one of the only things I’m good at in the kitchen is taking two things that are already hugely successful and combining them.

In the end though it turns out that Hollandaise sauce and gravy actually go pretty well together. That’s not to say that I’d combine them both in a cup and chug it or anything like that. Actually… that sort of sounds like something my college buddies and I would have dared each other to do after a long night of drinking.

It’s like the time they somehow convinced me to snort multiple lines of ketchup off a table at a bar up in Minnespolis. I woke up the next morning, sneezed and freaked out because I thought my nose was bleeding, but it turns out that there was just a bunch of ketchup left up there. Yeah, I was sort of an idiot in college…. I also accidentally drank motor oil one time because I thought it was melted chocolate, but that’s a story for another time.

You should probably be able to figure out how to make this just by looking at the photo, but just in case you can’t here’s a quick rundown. Take some fries, top them in gravy, cheese curds and diced Canadian bacon and then throw a poached egg and some hollandaise sauce over the entire thing. I sort of feel like an idiot for even explaining that since it’s so basic. It’s like those food blogs that have printable recipes for things like nachos or turkey burgers as if anyone doesn’t already know how to make either of those things already.

A big part of how great my Poutine Benedict tasted could have been the super fresh, super squeaky cheese curds from Saxon Creamery that I used. Being from Wisconsin I’m no stranger to fresh cheese curds, but damn, I have no idea what Saxon does to theirs but they’re easily the best cheese curds that I’ve ever had. They’ve just got that certain je ne sais quoi. Also, I promise that this is the last time you’ll ever have to read the phrase “je ne sais quoi” here on DudeFoods.

2 Comments on The Poutine Benedict