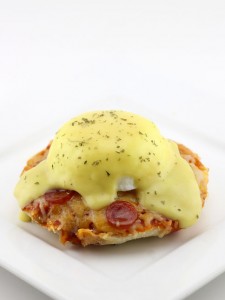 I guess you could say the same for Eggs Benedict too, with how often I eat and write about that, yet here I am, combining two of my most consumed foods into one!

I’m not sure why I really feel the need to explain how I make stuff like this, since it should be pretty self explanatory just by looking at the photo, but then again there are also recipes out there for avocado toast so….

I can already tell this is going to be one of those blog posts where as soon as I post it on social media half of the people that see it are going to think it looks delicious ad the other half are just going to absolutely hate it, but if you’re in that first half just take an English muffin, top it with pizza sauce, cheese and pepperoni and throw it in the oven at 375° for about ten minutes. Once you’ve got your mini pizzas just top them with a poached egg and some hollandaise sauce and you’ve got your Pizza Benedict!