I couldn’t decide between one giant burrito and seven mini tacos for lunch the other day so I figured what the hell, I’ll just pour some batter over the burrito, bread it in the mini tacos, deep fry it and eat the entire thing because that’s totally the logical thing to do right?

To create it I followed a process similar to when I made my French Fry Bun Double Cheeseburger, White Castle Slider Breaded Big Mac and Chicken Nugget Breaded Whopper and started off by placing my burrito in a bowl lined with plastic wrap. I then poured batter over the burrito, stuck the mini tacos to it, wrapped it up and froze it until I was sure that the tacos wouldn’t detach from the burrito when I deep fried it.

After about five minutes in the deep fryer I let me burrito cool and then topped it in nacho cheese and creamy avocado salsa. I’m also pretty sure that this was the first time ever where I actually cut my burrito in half prior to eating it, which was necessary due to the sheer size of the thing.

For as fun as this was to make though and for how cool it looked when I was done I honestly wasn’t super psyched with how it tasted. The mini tacos I used — which were from the freezer section of the grocery store — were just totally bland. Had they been filled with anything more than the trace amount of ground beef they contained the whole thing would have tasted amazing, but that wasn’t the case. All they really did was add an extra layer of breading. Dipping it in salsa helped a bit, but overall this is one of those rare instances where bigger was not necessarily better. 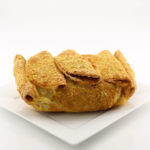 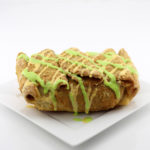 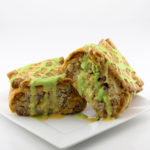 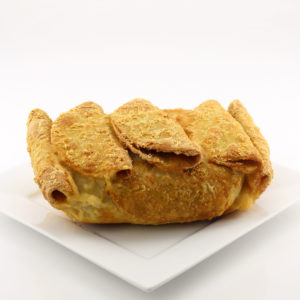