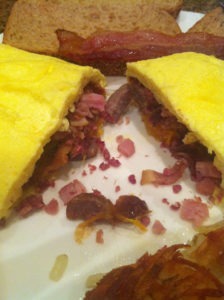 You can definitely work up quite an appetite drinking and gambling all night long in Las Vegas, and that’s how I came upon this omelet. It was around 5:15am our second night in Sin City and we were playing video poker at the MGM Grand when we all started getting a little hungry. We decided to head to Studio Cafe since last year when we were in Vegas they were open 24 hours a day, but as it turns out they’ve since changed their hours and don’t open until 6am now. Obviously our only choice was to have a couple more drinks, gamble for another 45 minutes and be first in line for breakfast.

When the clock struck six we strolled over to the cafe and took a seat. Our waitress handed us our menus and it was then that I saw it, right between the Veggie Egg White Frittata and the French Toast Short Stack — the Meat Monger Omelet — hickory bacon, corned beef, pork sausage, maple ham and cheddar cheese all packed into one delicious omelet served with hash browns and toast.

I feel like I would have enjoyed my omelet more had I not been falling asleep at the table while our food took 30 minutes to arrive, but I devoured it nonetheless. Five minutes later I was soundly asleep in my hotel room ready to get a few hours of rest before I woke up for another action packed day of drinking, gambling and eating mass amounts of food. 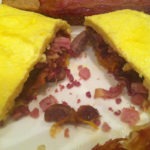 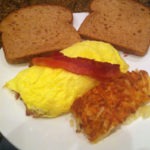 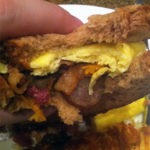