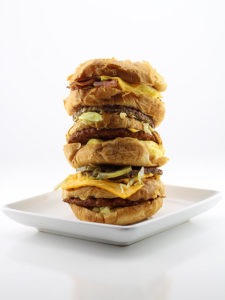 I’m sure that by now you’ve all heard about how Burger King reached out to McDonald’s to come together for a one day event on September 21st, which happens to be World Peace Day. The idea was that the two fast food chains would host a special pop-up event in Atlanta — which is half way between their two respective headquarters — and sell a combination Big Mac / Whopper sandwich that they oh so creatively named the McWhopper.

Now I know that the whole point of this was supposed to be to raise money for a non-profit organization (although if we’re being completely honest I’m sure that Burger King’s main purpose was to get a ton of free publicity), but speaking strictly from a food standpoint I think the collaboration would have been a terrible idea and frankly I’m happy McDonald’s backed out. Why you ask? Because the Whopper has the same boring dry meat patties that the Big Mac does.

Granted, Whopper patties are larger, but still, have you even been eating a burger and thought to yourself “Wow, do you know what would really make this burger better? If it had a Whopper patty instead!” Nope, I can guarantee that phrase has never been uttered once in the 58 years that the Whopper has been around. The only way it might make your burger better is if you’re eating one of those terrible fake meat patties. I’d swap a Whopper patty for one of those in a second….

Now I’m not claiming that Big Macs on their own aren’t awesome or that Whoppers aren’t delicious as a whole, I’m just saying that aside from the size there’s such a negligible difference between the two patties that the burger would taste almost exactly the same. I’d totally swap In-N-Out, Shake Shack or Five Guys patties with Big Mac patties no questions asked, but Whopper patties? No thanks. On top of that, Burger King has already ripped off the Big Mac anyway with the Big King, so if you really want to know what a Big Mac with Burger King meat patties tastes like you can find out any day of the week and on top of that you don’t even have to travel to travel to Atlanta!.

Now I know it’s easy to tell someone that their idea is terrible without offering up an alternative of your own — trust me, it happens to me on social media every time I post one of my creations — so what I’m proposing instead is a Big Mac that has Burger King Croissan’wiches for buns.

Don’t get me wrong, I love MCGriddles, McMuffins and pretty much every breakfast item that McDonald’s offers, but when it comes to fast food breakfast sandwiches nothing beats Burger King’s Croissan’wich. Plus, the fact that they’d be combining three Croissan’wiches with each Big Mac means that they could charge more for the sandwich which means EVEN MORE MONEY FOR CHARITY! It’s a win win situation!

I know that some of you might be thinking “But Nick, I can’t eat that many Croissan’wiches and a Big Mac!” and that’s totally fine. Just slice it in half and share it with a friend! After all, we’re trying to celebrate World Peace Day and what’s more peaceful than a couple friends sitting in a chain restaurant sharing a 1,690 calorie fast food burger…. So, while I may not be too keen on a McWhopper as far as this Big Mac’wich goes… I’m lovin’ it!