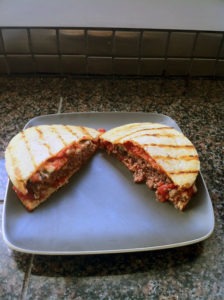 I got an email recently from the social media director for Home Run Inn Pizza. She mentioned how they recently launched their “Ultra Thin” personal frozen pizza line, which is a collection of 280 – 380 calorie personal pizzas that you can bake, grill or even cook in your microwave. She offered to send me a couple of the new pizzas to try and if there’s one thing I like more than pizza it’s FREE pizza so I happily obliged.

These personal pan pizzas measure six inches in diameter, which is probably perfect for most people looking for a quick snack. Since they’re microwavable and low in calories they’d also make a great lunch alternative for people working in offices who usually bring in Lean Cuisine type meals for lunch.

If you’ve read any of my other blog posts however you’ve probably realized by now that just throwing one of these pizzas in the microwave and tasting it isn’t going to cut it here on DudeFoods. That’s why I decided to use two of them to make a pizza burger. I’m not talking about your typical burger topped with mozzarella cheese and marinara sauce that sits between a regular hamburger bun though, I’m talking about a half pound ground beef patty that utilizes two Home Run Inn personal frozen pizzas as the bun.

I started out by taking one sausage pizza and one Margherita pizza and heating them up in my microwave. While they were cooking I flattened a half pound of ground beef into a burger patty, tossed it on the grill and topped it with some mozzarella cheese. When the burger patty was ready I placed it on top of the Margherita pizza, topped it with the sausage pizza, cut it in half and enjoyed my delicious Home Run Inn pizza burger.

Ideally I probably should have flattened the burger patty out a little more so it was the exact same size as the two pizzas, but I think it turned out pretty good anyway. The funny thing about this burger is that even with two personal pan pizzas, a half pound of ground beef and some extra cheese it was still probably more healthy than a lot of the meals I normally eat. 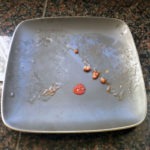 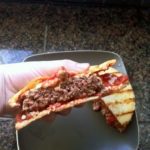 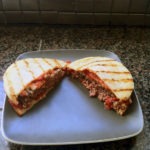 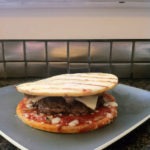 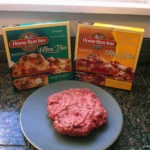