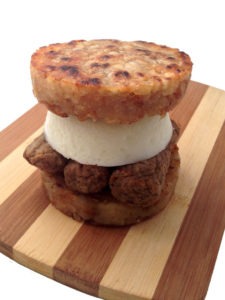 The idea behind creating a bun made from hash browns was inspired by the ramen noodle bun that made its way all around the internet back in August. After seeing it, I got to thinking about what other non-conventional foods could be used to create a unique bun, and finally I settled on hash browns.

Why did I choose hash browns? Mainly because they always stick together pretty well, so I figured that they could be formed into a pretty structurally sound bun. More importantly than that though, I just really, really love breakfast!

To create the hash brown bun I started by placing a couple metal egg rings in a pan on my stove, and then packed each one as full as I could with shredded hash browns. After that it was just a matter of waiting for the hash browns to cook.

The cooking time will vary depending on just exactly how well you like your hash browns done. For mine I just lifted up the bottom of the egg rings with a spatula every few minutes until the bottom of my bun was golden brown and then flipped them and did the same with the other side.

A metal measuring cup would probably work just as well for shaping and cooking the hash brown buns, but the beauty of using egg rings is that they made it extremely easy to flip the hash browns to ensure that both sides were cooked evenly.

Once my hash brown bun was complete I used one of the same egg rings to fry up an egg, and along with some breakfast sausage I had myself a nice little sandwich! Some round breakfast sausages probably would have worked a little better, but sometimes you’ve just gotta make due with what you’ve got!

Granted, the hash brown bun still wasn’t the easiest thing in the world to eat because no matter how well you cook hash browns they’re still going to fall apart at least a little when you start handling them, but it was still a pretty delicious sandwich nonetheless!