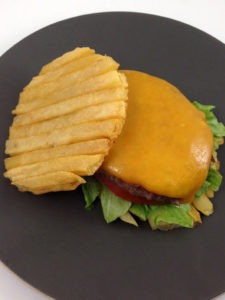 As you can probably tell from my Bacon Weave Breakfast Burger and my Hash Brown Bun Breakfast Sandwich, I’m always looking for ways to turn foods that aren’t normally used as buns into buns. For my most recent experiment I decided to use some edible adhesive — normally used by bakers to attach edible decorations to cakes — to glue some French fries together, which I then cut into a couple circles to use as buns for a cheeseburger.

I started off by picking up some frozen fries from my grocery store’s freezer section and baked them in my oven according to the directions on the bag. If you’re going to try this it’s also important that you find a brand of fries that are straight cut, because if they aren’t straight you’re going to have a hell of a time trying to glue them together.

It’s also important to make sure the fries are nice and crispy. This edible glue isn’t like Super Glue where you barely have to press two things together and they’ll stick, so if your fries aren’t cooked thoroughly and you try gluing them together they’ll just end up squished.

Once I had two squares of fries glued together I placed an upside down glass over each one and cut around it with a knife to create the two circular “buns” that you can see in the photos below. After that it was just a matter of adding some lettuce, tomato and my cheeseburger and enjoying my meal!

Prior to making this bun out of French fries I was a little worried about how the edible adhesive might affect the taste of my cheeseburger. I tasted the glue on its own it ahead of time and although it was primarily tasteless it did have a slight hint of lemons to it, but as part of a burger I couldn’t distinguish any taste difference at all. Granted, it still takes a little more time to do it this way than to just use a regular bun and eat your fries on the side, but come on, that’s how its always been done! 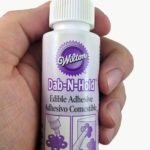 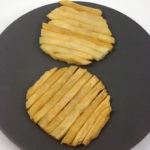 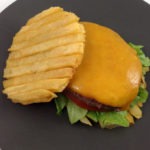 12 Comments on The French Fry Bun