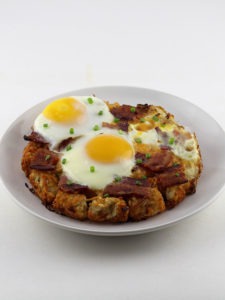 This time I once again turned to my springform pan to help me shape my pizza, but instead of packing it with rice or macaroni and cheese like I did with my two previous pizzas I lined its bottom with tater tots and shredded cheese. I then topped it with bacon, cracked a couple eggs over it and tossed it in my 500° oven for 15 minutes.

Now if you try making this you’ll want the tater tots cooked prior to adding them to the pan, but not too cooked or else they’ll just end up burnt after they’re done in the oven (I learned this one the hard way). What I ended up doing was just baking mine for five minutes less than the directions on the bag called for. The same goes for the bacon.

So how well did it work as a pizza? If you actually wanted to pick up slices of this and eat it like a regular pizza I’m sure it would work (the cheese held the tater tots together pretty well overall), but I channeled my inner Mr. Pitt (shout-out to all the Seinfeld fans out there!) and used a knife and fork instead. If I made it again I’d probably try to sneak one or two more eggs on top of it just because I’m a big proponent of using either toast, hash browns or in this case tater tots to soak up runny egg yolk. Either way though, this Tater Tot Crust Breakfast Pizza was pretty damn good!