You see, the problem with every breakfast pizza I’ve ever eaten is that they just use a regular pizza crust. Where’s the creativity in that? I give Palermo’s Pizza credit for creating a pizza crust that tastes almost biscuit-like, but I wanted to take my breakfast pizza one step further, and that’s why I decided to use a Belgian waffle as my crust. The next question I had to ask myself was what kind of sauce to use on my pizza when it suddenly came to me; Hollandaise sauce!

I started off by cooking a Belgian waffle in my waffle maker, whipping up some scrambled eggs and some Hollandaise sauce on my stove and cooking some bacon and some maple syrup flavored breakfast sausages. Once everything was done I poured the Hollandaise sauce over my Belgian waffle and topped it with shredded mozzarella and Cheddar cheese, the scrabbled eggs, sausage and bacon chunks and some chopped up red and green peppers.

Since everything was already pre-cooked I didn’t want to risk burning anything (especially the waffle) by putting it into the oven for too long, but I definitely wanted to get the cheese nice and gooey. I only ended up cooking it for seven minutes at 350°, but that turned out to be the perfect amount of time as the breakfast pizza turned out amazing. Seriously, and I don’t mean to be narcissistic here, but for being a terrible cook I sometimes amaze myself with how good some of my random creations are. 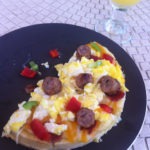 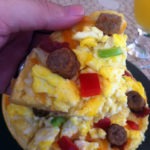 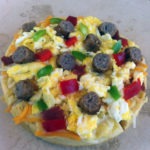 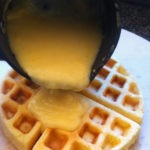