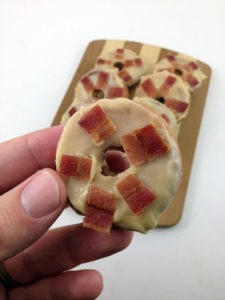 My sister-in-law bought me a mini doughnut maker for Christmas and for my first experiment with it I decided to try making some Elvis Doughnuts.

An Elvis sandwich, for those of you who are unaware, consists of bacon, peanut butter and banana between two pieces of grilled bread. The name comes from the fact that the sandwich was apparently one of Elvis Presley’s favorite things to eat.

I’ve experimented with different iterations of the Elvis before, by creating things like Elvis Cookies, a spicy version of the Elvis and even one that included bacon weaves, These Elvis Doughnuts might be my favorite so far though.

My doughnut maker came with a list of sample recipes, so for the Elvis Doughnuts I just decided to take one of the basic doughnut recipes and switch it up a little by adding some banana. Here are the ingredients I combined for my doughnuts:

After mixing everything together I poured the batter into my mini doughnut maker and cooked my doughnuts by following the included instructions. If you’re making larger doughnuts this same exact recipe will work fine, but you’re on your own as far as cooking times go because that will obviously vary depending on how large your doughnuts are.

Alright, now that I had the banana part of the Elvis Doughnut taken care of I decided to add a peanut butter glaze to the tops of the doughnuts. Here’s the recipe for the glaze:

The recipe booklet that came along with the mini doughnut maker says to just combine equal parts of whatever flavored glaze you want with milk and then microwave it in 30 second increments, so basically a cup of peanut butter with a cup of milk if you want a peanut butter glaze. That glaze didn’t taste very good at all though, so if you’re going with a peanut butter glaze I’d use the powdered sugar, peanut butter, milk and vanilla combination that I used.

With my doughnuts baked and glazed all I needed now was on final ingredient — the bacon! For that I used some maple flavored bacon since it seemed like that would work the best, and when I bit into my first Elvis Doughnut I knew that I’d made a wise decision. I’m not normally a big fan of sweets, but I just couldn’t seem to stop eating these until they were completely gone. I’d definitely consider my first attempt at doughnut making a success! 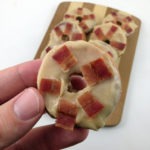 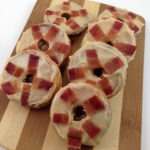 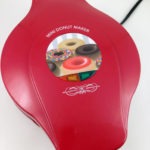