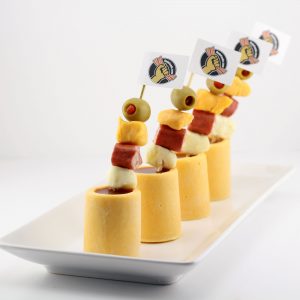 Well, here it is… the most Wisconsin thing I’ve ever made! Mini Bloody Marys served in edible Cheddar cheese shot glasses!

This time around I melted some Cheddar cheese and poured it into the silicone mold, which I then moved to my refrigerator until the cheese hardened back up. After a couple hours I had eight completely edible Cheddar cheese shot glasses!

Next up on the agenda I just need to figure out a way to make larger edible cheese pint glasses! Then again though, with the shot glass version it’s always fun to tell people how you just had five or six Bloody Marys.

It’s like the time I was headed to Lambeau Field for a Green Bay Packers game with my buddy Allen and grabbed a couple cases of Miller Lite from a liquor store on the way up there without realizing they were cases of 8 ounce cans. We looked like total weirdos tailgating with our mini beers, but on the plus side we were able to tell everyone at the game how we crushed 20 beers each prior to even getting inside the stadium.