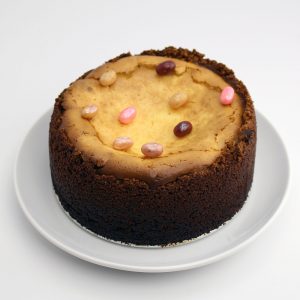 A month or so ago on the DudeFoods Podcast Wes and I were talking about how there was a line of Golden Girls-inspired hot sauces.

Well, the company that makes them apparently heard the episode because last week a box with all four bottles showed up at Wes’s house. Also included for some reason was a box of Krispy Kreme flavored Jelly Belly jelly beans.

Included on each hot sauce bottle was a recipe for cheesecake with Golden Girls hot sauce included in the crust and batter. Until then I’d never heard of anyone adding hot sauce to cheesecake, so I figured that the only logical thing to do was to make the cheesecake and add the Krispy Kreme flavored jelly beans to the top of it.

The hot sauce bottles didn’t include a recipe for the crust aside from saying to add one tablespoon of hot sauce to your “favorite crust recipe,” so I planned to use a graham cracker crust recipe that I found on the internet until I realized that using Golden Grahams was way more appropriate because of the whole Golden Girls / Golden Grahams thing.

Prior to this I’d never even attempted to make cheesecake at home, but for a first attempt it actually turned out pretty decent! I did have one minor setback when my kitchen temporarily filled with smoke because the bottom of the springform pan I was using started leaking in the oven, but after moving it on top of a cookie sheet instead of just resting it straight on the oven rack the problem was solved.

Since the recipe only called for one tablespoon of hot sauce in the crust and one more in the cream cheese mixture you could just barely taste it, so depending on how much you like hot sauce you might want to add another tablespoon or two. For someone like me who isn’t a huge hot sauce fan to begin with though it was the perfect amount. 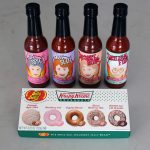 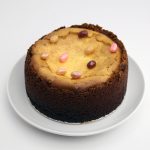 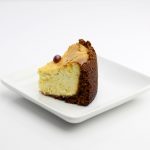