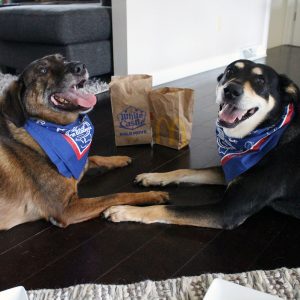 If you’ve been following this blog for a while or if you’ve ever listened to the Dude Foods Podcast you’d know how much I love McDonald’s.

Before I got fired from my crappy office job I ate lunch there four or five times a week. I got to be such a regular at the closest McDonald’s to my office that I started splitting up my visits between three other locations that were a little bit further away and even then every single one of them had employees that would remember me each time I came in.

My dogs Finn and Holden are actually fans of McDonald’s as well. Every once in a while when I go there I’ll grab them each a McDouble and they go absolutely crazy for them. They start running around at the sight of me carry a McDonald’s bag into the house.

My all time favorite fast food restaurant though is White Castle. Unfortunately, since the closest White Castle is almost an hour away in Kenosha, Wisconsin I don’t get to enjoy their sliders anywhere near as much as I’d like to. Also, I’m aware that you can buy them frozen in the grocery store, and even though those are good they just aren’t the same….

Well, as luck would have it I had to drive to Chicago a couple weeks ago to pick up a flamethrower that I bought and much like every other time I travel to Chicago I made a stop at White Castle for some sliders on the way back. This time however I also brought sliders home for Finn and Holden and set up a taste test between those and some McDoubles to see if they dig White Castle just as much as I do. So what did they choose? Check out the video below to find out!