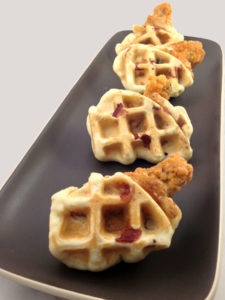 Last year I created Chicken and Waffle Wings — chicken wings that are breaded with actual waffles. It ended up being the most popular post of the entire year here on DudeFoods.

Ever since then I’ve been telling myself that I need to follow them up with a version that included either bacon or chocolate chips in the waffles. Well, I finally did it! Check out these Maple Bacon Chicken and Waffle Wings!

This time — unlike with the original version — I started off by using breaded chicken wings. Any chicken wings should work, but since you ideally need something to hold on to as you’re eating your Chicken and Waffle Wings it’s easiest to use the “drumette” portion of the wing, which is the one that looks just like a miniature drumstick.

Once you have your chicken wings you’ll want to make sure they’re fully cooked and then whip up some waffle batter. Similar to with the wings, any batter should work so if you have a specific recipe you like then go with it. I just used Bisquick and then fried up the last of my Black Label Maple bacon that Hormel sent me a while back, chopped it up and added it right to the waffle batter.

The cooking time will vary depending on how large your chicken wings are and how much waffle batter you use, but when you lift up the top of your waffle iron and notice that the tops of your waffles are a nice golden brown your Chicken and Waffle Wings are most likely ready to eat.

Also, make sure you don’t use too much waffle batter or your waffles will cook unevenly around the chicken wings. Less is definitely more when it comes to making these. Then again, maybe my undercooked waffle issues just stem from the fact that I have a crappy $15 waffle maker….

Overall these turned out WAY better than my original Chicken and Waffle Wings, which with how great those were I didn’t even think was possible. The breaded chicken, maple bacon, a drizzle of syrup… How can you go wrong?

I actually made a chocolate chip waffle version the same day as well, but the pictures I took of them just didn’t turn out very well. That’s not to say that they weren’t absolutely delicious though because they were! In fact, I’m guessing that pretty much any type of waffle would go great when it comes to making Chicken and Waffle Wings. Apple cinnamon waffles? Why not!? Sweet potato waffles? The sky is the limit! 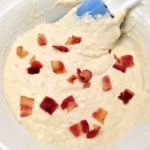 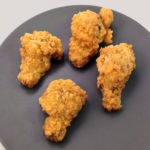 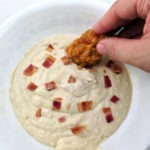 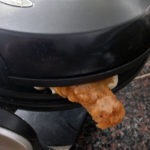 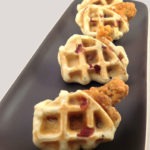 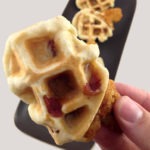