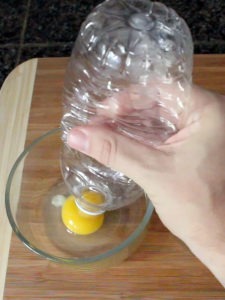 Two and a half years ago my aunt Jenny left a comment on one of my posts and shared a video from Foodinese with me where a guy used an empty water bottle to separate egg yolks. After a bit of research it appears that this bit of sorcery first appeared on a Chinese talk show.

The premise behind the trick is that you crack an egg into a bowl as you normally would and then take an empty water bottle, squeeze it to let some of the air out, hold it over the yolk and release your grip on the bottle to suck the yolk up. After that you just need to squeeze the bottle over a second bowl to release the yolk.

I kept meaning to try this back when I originally watched the video, but as you can probably tell, I’m not exactly an egg white omelette type of guy so there aren’t many times when I need to separate my yolks. After a while I kind of just forgot about the idea until recently when I was reading back over my Eggs in Clouds post— which is where the original comment was made — and I was reminded of it.

Well, I’m happy to report that I finally gave it a shot, and it’s just as easy as it looks! I even filmed my own quick little video that you can check out below! Will this amazing breakthrough lead me down the road to healthier breakfasts? Highly unlikely, but it’s always good to know that the option is there I guess!