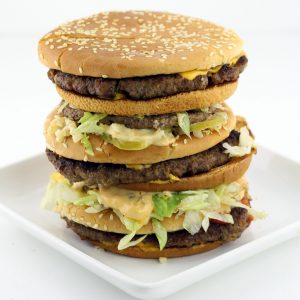 If you follow me on social media — or if you were reading DudeFoods back in 2013 when I made The McEverything — you should already know how much McDonald’s I eat on a regular basis. Well, eating McDonald’s here in Milwaukee just got even easier because as of today more than 50 area locations are now offering delivery through UberEATS!

In case you’re unfamiliar with UberEATS it’s basically Uber for food delivery, where the same people that normally give you rides now also pick up food from restaurants — a majority of which don’t offer delivery on their own — and bring it straight to your home or office. You can order with your existing Uber account either at UberEATS.com or straight through the UberEATS app. Also, if you’ve never used UberEATS before you can use the code MCDSMILE through December 31st to get $5 off your first order.

The last time I was in Vegas I even had them deliver a sushi burrito straight to my video poker machine at MGM so I wouldn’t have to stop gambling to go eat dinner. A few minutes later — after switching to keno and before I even had a chance to finish my burrito — I won $2,478. If I actually had to get up to go eat I’m guessing that some rando would have grabbed my seat and in turn my sweet, sweet win. Thanks UberEATS!

Obviously I had to try out this whole McDonald’s delivery thing for myself so earlier today I ordered three Quarter Pounders With Cheese and a Big Mac. I then flattened out the Quarter Pounders by placing a cutting board and a couple 25 pound bricks on top of them and then swapped out the Big Mac buns with my flattened burgers. I still haven’t come up with a cool name for this amazing new sandwich (The Triple Quarter Pounder Big Mac maybe?), but I highly recommend that McDonald’s start selling it immediately!

What’s even better is that aside from a $4.99 booking fee per order all you pay is regular McDonald’s menu prices. You can’t order ice cream or take advantage of their McPick 2 deal, but other than that the entire McDonald’s menu is now fair game for delivery!

I originally though about ordering one of every single sandwich they have and making an updated version of The McEverything, but with how many different choices they offer now vs. what they had when I originally did it four years ago I probably would have had to spend an entire week’s pay on it.

Don’t get me wrong, I’m extremely excited about this, but on the other hand, there are definitely times — usually after a long night of drinking — where getting up to go grab some McDonald’s is the one motivation I have to actually leave the house. I mean, the all day breakfast thing already made that a lot easier since now I can roll out of bed at noon and still go grab a couple Sausage McMuffin With Egg sandwiches, but this whole UberEATS / McDonald’s delivery thing could take my laziness to a whole new level…. 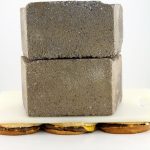 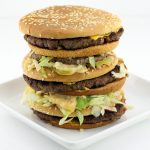 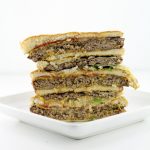