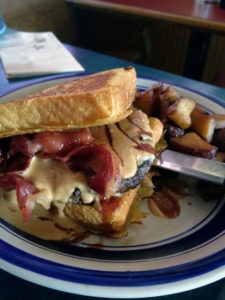 Breakfast is by far my favorite meal of the day. There isn’t much I enjoy more than heading out to eat with friends and grabbing a few drinks and some good food, so when there’s a new restaurant in town offering brunch I’m always eager to check it out.

Although Hamburger Mary’s has been around since 1972 with eleven locations across the country they just recently set up shop in my hometown of Milwaukee. A couple weeks ago I finally made the trek in with my wife and our friend Curt to give them a try.

We started off with the Loaded Ta-Ta’s, which are tater tots covered with cheese, sour cream, tomato and scallions. We all agreed that although they were good they sort of just tasted like something we could have easily made ourselves by tossing some cheese on a pile of tater tots, microwaving them, and then topping them with a spoonful of sour cream and some diced tomatoes.

When it came time to order our meals I decided to try the French Toast Burger, which the menu describes as a half-pound Angus burger topped with bacon, peanut butter and homemade strawberry jam served between two slices of French toast. The burger tasted great, the bacon was cooked to perfection and the peanut butter and jelly mixed amazingly well with the greasy hamburger patty, but I did have one problem with it —  the “French toast” wasn’t very French toast like at all.

The term “French toast” implies that the pieces of bread are dipped in egg before frying. Although the sides of my bread looked like they were battered, the top and bottom halves of the bread that faced outward from my burger clearly weren’t and were simply grilled instead. Maybe they only battered one side of each piece of bread and those two sides just happened to be facing inward, but I definitely wouldn’t call what I got “French toast.” Again, the burger itself was good, but if I had simply ordered the French toast as my meal I would have been extremely disappointed with it.

The one other good thing I’ll say about the French Toast Burger from Hamburger Mary’s is that it wasn’t anywhere near as disappointing as the egg sandwich that Curt ordered or the egg, spinach and feta cheese scrambler that my wife chose. The scrambler was completely tasteless and the amount of feta mixed in with the eggs was sparse at best. Then again, their menu did only describe the amount of feta in the scrambler as “a bit,” so maybe the fact that there was barely any of it at all is the norm.

Curt’s egg sandwich suffered from a similar lack of taste. It was also supposed to be served on a brioche bun according to the menu, but instead came served between two slices of white bread. I’m sure that must people wouldn’t even care if their egg sandwich was served on a fancy French roll, but if a menu describes a sandwich as being served on a brioche bun and then the waitress drops it off and all you see is two boring pieces of plain white bread instead it’s just sort of a letdown.

The best way to sum up Hamburger Mary’s is that they have a really creative and unique menu where everything SOUNDS delicious, but they just don’t execute it very well. I don’t know if it’s just the cooks at their Milwaukee location or the recipes themselves, but if they could just add a little flavor to their dishes (or at least use the correct types of bread) their food would be WAY better. One of the main reasons I like to go out to eat is to enjoy food that tastes better than what I can make for myself at home. I’m not a good cook by any means, but when I taste three different dishes at a restaurant and don’t prefer any of them to something I could just whip up myself that isn’t a very good sign. 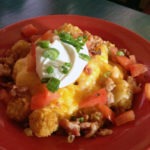 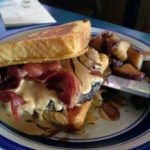 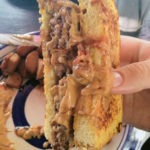 2 Comments on The French Toast Burger