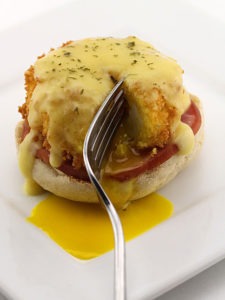 I’ve deep fried a lot of things in my day — hell, I deep fried a ton of stuff last week alone — but one thing I’ve always wanted to try making was Deep Fried Eggs Benedict.

The one part that always worried me about attempting to deep fry a poached egg though was that it would end up overcooked. There’s nothing worse than getting all amped up about Eggs Benedict and then cutting into the egg only to have no egg yolk at all come out.

To remedy this I poached a couple eggs, but removed them from the boiling water a minute or so earlier than I normally would have. Then, to slow down the cooking process I dropped them into a bowl of ice water before covering them in flour, dipping them in an egg wash and then rolling them in panko breadcrumbs. After that I just dropped them in my deep fryer.

Once the breading was nice and crispy — after about 60 seconds in the 375° oil — I took the deep fried eggs out, plopped them down on top of toasted English muffins and Canadian bacon and drizzled hollandaise sauce on top of them.

When I finally cut into the egg I saw exactly what you always hope for when eating Eggs Benedict —  plenty of gooey yolk pouring out onto the plate! It was phenomenal. Then again though, taking anything and deep frying it is usually a sure fire way to improve upon it — as is pouring hollandaise sauce on top of things — so combining the two was basically a guaranteed win. 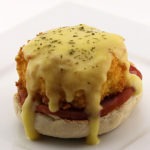 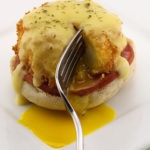 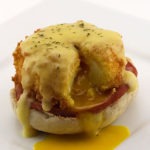