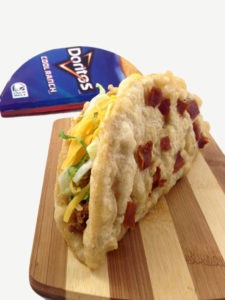 You know what I love about Taco Bell being open until 2am? You can sit at a bar drinking all night, come up with an idea like a Deep Fried Doritos Locos Taco and not have to wait until the next day to make one!

You see, a while back I made some Beer and Bacon Battered Deep Fried Doritos and long story short, they were completely delicious. At the same time, Taco Bell recently announced that they’ve sold half a billion Doritos Locos Tacos since they were introduced a little over a year ago, so I figured, why not combine the two? Yep, I’m talking about a Beer and Bacon Battered Deep Fried Doritos Locos Taco!

So, once again I combined some beer and flour to create a batter and added some diced bacon to it. I used larger pieces of bacon than I did when I made my Deep Fried Doritos and definitely preferred it this way. The more bacon the better! Then, I emptied out my Doritos Locos Taco, dipped the shell in batter, sprinkled it with even more bacon pieces and threw it in my deep fryer.

After a couple minutes my deep fried taco shell was done cooking so I let it cool, filled it back up with the ground beef, lettuce and cheese that I’d previously removed and took a bite. Overall it was even better than the original Deep Fried Doritos that I made. I mean, Beer and Bacon Battered Deep Fried Doritos are great and all, but using those same ingredients and turning them into a taco just takes it to a whole new level.

So what’s next for me? Well, a couple people have already suggested wrapping a Doritos Locos Taco in a bacon shell similar to the one I used for my Bacon Weave Taco, so that’s definitely a possibility. In fact, maybe I’ll even add some melted cheese between the two taco shells like Taco Bell does with their Cheesy Gordita Crunch! 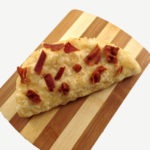 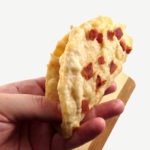 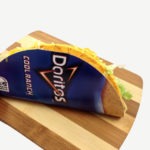 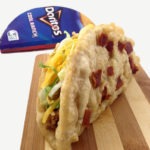 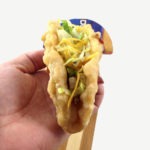