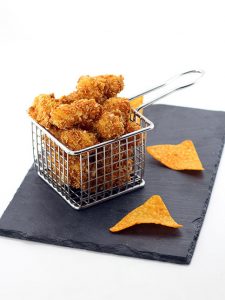 This is the second recipe / video that the Wisconsin Milk Marketing Board asked me to do to help spread the word about their Summer of Curds promotion where until September 21st they’re giving away a cheese curd prize pack — including a pound of deliciously squeaky Wisconsin cheese curds — every single day.

My first recipe was a burger that had a deep fried bun made from bacon wrapped cheese curds, and although they specifically asked me for an idea that was “over-the-top” I’m guessing — based on some of the comments I got about it on social media — that maybe it was just a little too over-the-top for some people?

Don’t get me wrong, there were tons of positive comments as well, but there were also plenty of people asking things like “How could anyone ever eat that?” and “This looks awesome, but how would you even finish it?” Well, here’s a recipe that’s a little more practical….

The great thing about deep fried cheese curds is that it doesn’t matter if you dip them in beer batter and deep fry them or if you bread them in panko breadcrumbs prior to frying them — either way they’re going to turn out amazing.

This also isn’t the first time I’ve used Doritos as a breading. I’ve previously crushed the tortilla chips up and used them to bread everything from chicken strips to burger patties. Seeing as how it always worked out so well in the past I figured that I might as well try breading some cheese curds with them as well and as expected, they were just as delicious!

If you want the recipe for these amazing Deep Fried Doritos Breaded Cheese Curds just head over to WisconsinCheeseTalk.com. When you’re done there make sure you also visit EatCurds.com and enter to win a pound of fresh Wisconsin cheese curds, an EatCurds.com t-shirt, a cheese curd can koozie, magnet and a coupon for more curds (because that first pound of cheese curds is going to be gone in no time at all).