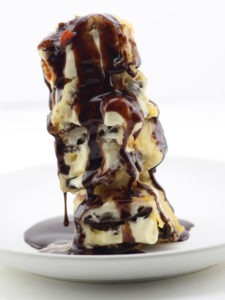 I don’t really have a cool story about how I came up with the idea for this blog post like I do with most of my others. I just had a few ice cream sandwiches left in my freezer from a box of 12 that I bought a while back and as I was about to eat one I got to thinking about how it’s been a while since I deep fried anything with beer and bacon batter. The next thing you know I blacked out for about 15 minutes and woke up to find this monstrosity! Alright, I’m kidding about the blacking out part, but the rest is true.

These were super amazing and really simple to make. I just grabbed the ice cream sandwiches and dipped them in a batter that was half beer and half flour that I’d also sprinkled some cooked bacon pieces into and then dropped them in my deep fryer for a couple minutes each.

A great thing happened while I was making these as well. My original beer batter wasn’t anywhere near as thick as it needed to be so the first ice cream sandwich I tossed in the deep fryer sort of just disintegrated into the hot oil. At first I was bummed that I’d wasted one of them until I realized that all the sugar from the ice cream that was now in the deep fryer added a delicious sweetness to the two ice cream sandwiches that I deep fried afterwards. It was the perfect accident!

Once the Beer and Bacon Battered Deep Fried Ice Cream Sandwiches were done I chopped them in half, piled them on top of one another and drizzled chocolate syrup over them. The crispy beer batter and subtle salty hint of bacon combined perfectly with the sweetness of the ice cream and chocolate to create what I can only describe as some sort of crazy ice cream sundae on steroids.

It’s funny, I just read a study put together by the World Health Organization that said even one bag of M&M’s contains more sugar that you should eat in a day, so if that’s the case I think I got about two years worth of sugar by the time I was done with this. Unless of course they were talking about this bag of M&M’s, in which case I probably only ate about three weeks worth of sugar…. 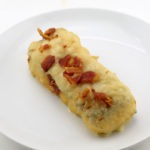 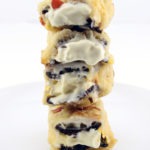 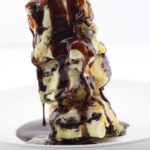