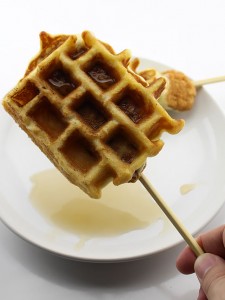 My buddy Kyle A.K.A. The Vulgar Chef absolutely loves chicken and waffles. So much so in fact that he often eats them multiple times a day. The problem with chicken and waffles though — or so he tells me — is that they’re a two handed ordeal which means he can’t eat them and drink beer out of his Pretzel Koozie at the same time. Well, here you go buddy! Chicken and Waffles on a Stick!

These are actually pretty similar to the Chicken and Waffle Wings I made a while back with one exception — instead of hanging chicken wings out of the sides of a waffle iron and pouring batter on them I used breaded chicken strips with kabob sticks in them instead.

Oh yeah, and I’m totally kidding about Kyle loving chicken and waffles. He hates them. The last time I talked to him about chicken and waffles his exact quote was “They’re a lot like Casey Anthony and will probably beat your children to death so you don’t really need them in your life.” I’m not sure I quite follow his reasoning on that, but I’ll take his word for it….