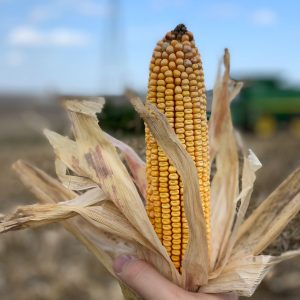 Earlier this month I was invited by Iowa Corn to spend a couple days in Iowa with eleven other bloggers learning everything there is to know — or as much as you can possibly learn in 48 hours — about corn.

Being from Wisconsin I’ve been on similar trips around my home state learning about milk and cheese and I actually noticed a lot of similarities between the farms I visited in Wisconsin and the farmers we talked to in Iowa when it comes to how much pride they take in their product.

Our trip started off at Iowa Distilling Company — because their bourbon, vodka and moonshine are all made using corn from Iowa — where we sampled pretty much every single spirit they make. Being a fan of Fireball and Jack Daniel’sTennessee Fire I also completely fell in love with Prairie Fire, which is their cinnamon flavored whiskey. 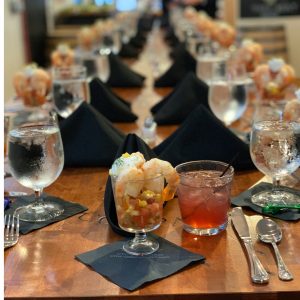 If I have one regret from my trip to Iowa it’s that I didn’t bring a checked bag onto my flight and in turn couldn’t bring a bottle of Prairie Fire back to Milwaukee with me. If you’re ever looking for a great tasting drink make sure you try Iowa Distilling Company’s Sweet Sweet Fire by mixing a shot of cinnamon whiskey with 2 oz. cranberry juice, 1/2 oz.simple syrup, 1/2 oz. lemon juice and a splash of club soda over ice.

We also had an amazing dinner at Iowa Distilling Company courtesy of Cyd’s Catering. Everything single course — from the shrimp cocktail with sweet corn and tomato pico which we started off with to the sweet corn lemon bread with vanilla corn syrup that we had for dessert — perfectly showcased the versatility of corn when it comes to cooking. With this being a food blog and all I probably should have taken photos of everything Cyd served us but it was all so delicious that all I could think about was eating it as fast as possible….

The next morning we headed to Dayton, Iowa where we met with Kellie Blair who farms corn, soybeans, cattle and pigs along with her husband AJ. Kellie talked to us about everything that goes into running a family farm, but most interesting part of the conversation for me was when we got to talk to her about the use of GMOs. 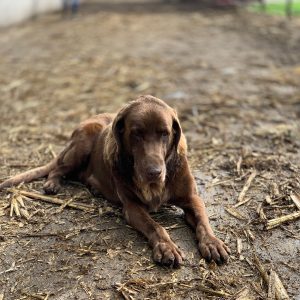 Prior to this trip I always just sort of assumed that GMOs were great for giant mega-farms, but not for smaller family farms like Kellie and AJ’s. When asked about GMOs though Kellie pointed out that when it comes to the corn they grow GMO corn actually makes it easier for them. She told us that whereas in the past they’d have to spray pesticides on the corn to keep certain pests away they can now plant GMO seeds that are resistant to those specific pests, so not only is it more cost effective but it also means that fewer pesticides than ever need to be sprayed on the corn people are eating. I actually remembered to take a bunch of photos that day — probably because there wasn’t a bunch of food sitting in front of me to distract me — but my favorite one was the one that I took of Kellie and AJ’s dog Doc, who followed us around on the farm all morning.

After our visit to Blair Farm we headed to Ames, Iowa to have lunch with Dr. Ruth MacDonald who is a nutritionalist and a Professor and Chair in the Department of Food Science and Human Nutrition at Iowa State University. As you can probably tell from some of the ridiculous stuff I make and eat this is obviously the first time I’ve ever met with a nutritionalist, so it was especially informative for me to be able to talk with her about the role that science and technology play in food. 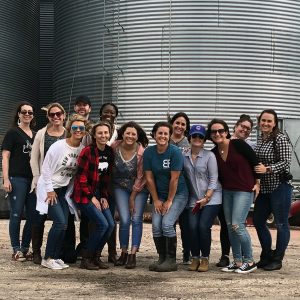 We also got to talk with Dr. MacDonald further about GMOs and about the whole organic food movement. As someone who has never purchased a single organic item in my entire life — again, have you seen the type of stuff I usually make? — it made me feel especially good when she told us that multiple studies have proven that organic foods hold no nutritional advantage over non-organic foods. I mean, I’ve been telling people that for years, but now I have an actual doctor on my side! I totally should have asked her to write me a doctor’s note backing me up just so I could keep it in my pocket at all times to pull out and show to people when they don’t believe me. I’m also pretty sure that this isn’t even a thing that doctor’s do, but it would still be pretty sweet to have….

For anyone who is curious like I was what the main difference between organic and non-organic is it all comes down to the way foods are produced. Organic foods are grown without the use of GMOs or synthetic pesticides, although natural pesticides can still be used. If you’d like to learn more Dr. MacDonald recommended BestFoodFacts.org and GMOAnswers.com and honestly, either of those websites will be able to explain things way better than I’ll ever be able to. 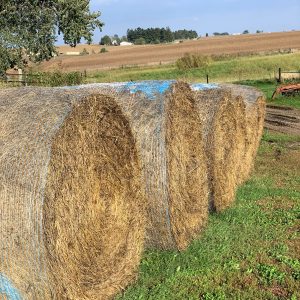 After lunch it was off to meet Michael Fritch on his fifth-generation family farm in Mitchelville where he grows corn and soybeans with his dad Lonne. Lonne actually let us ride around with him for a little while he harvested corn and it was crazy seeing how high tech some of the equipment they use is. Until that day I had no idea that combines used things like GPS to map the soil and guide themselves to make sure crops are planted perfectly. Totally unrelated fun fact: See that photo of hay bales over on the left? Each one weighs two tons! I totally didn’t believe it at first either until I tried to roll one down a hill and yeah, it totally wouldn’t budge….

Dinner that night was at Iowa Taproom, where they have 120 beers on tap from over 25 different Iowa craft breweries. I did my best to sample all of them, but sadly I had to bow out after about 15 beers…. I’ll be back at some point to finish those last 105 beers though! 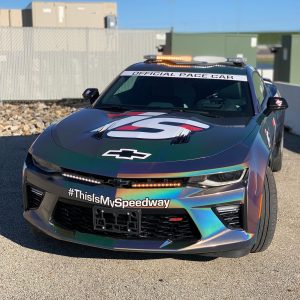 I know that a lot of people seem to be against ethanol production because they assume that as more corn is used for fuel less corn will be available to eat causing food prices to rise, but in reality a majority of food costs come from things like transportation, packaging, marketing and labor. Oh, and then we got to ride around the Speedway at 100 mph in a pace car, which was pretty awesome!

So, thanks again to Iowa Corn for having me. I know this is going to sound totally corny, but I had a blast soaking up as much corn knowledge as I possibly could. If you’d like to learn more you can more Iowa Corn has put together a super useful FAQ as well as a list of corn facts you can check out.