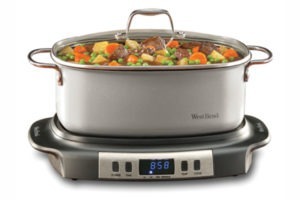 West Bend Housewares (one of the country’s best known small appliance brands) is celebrating their 100th anniversary this year, and to help get the word out they were nice enough to send me one of their new Versatility 6-Quart Slow Cookers. Right now I know that you’re probably thinking “Hey Nick, it’s great that you got a free slow cooker, but why should we care?” The answer to that is because West Bend is giving me a second slow cooker to give away to one of you!

This slow cooker has a ton of cool features (which you can read about by clicking here), but my favorite has to be the fact that the cooking vessel is removable, and when you lift it off the base you can use the bottom of the slow cooker as a griddle. Basically with this slow cooker you get a slow cooker, griddle and nice big serving dish in one.

Enough about how awesome this slow cooker is though, all you guys probably care about is how you can win it right? All you have to do in order to win is to email me at [email protected] with a slow cooker recipe that you think I’d like. It doesn’t even have to be a dish that you created, it can just be any slow cooker recipe you’ve found anywhere that you think I’d enjoy. On July 29th I’ll pick my favorite recipe out of all your submissions, make it in my new West Bend Versatility Slow Cooker that weekend, and announce the winner on Monday, August 1st. Good luck!

Update: 8/1/2011 — I’ve selected a winner! Thanks to the breakfast casserole recipe she submitted Courtney C. is now the proud owner of her very own Versatility Slow Cooker. Click here to see the winning recipe! 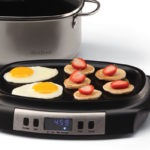 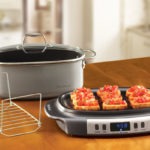 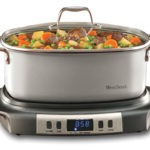 11 Comments on Who Wants to Win a Slow Cooker!?