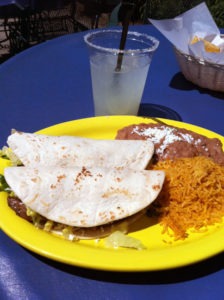 I’d never seen lamb tacos offered at a Mexican restaurant before I decided to stop at Poco Loco Cantina one day for lunch, so when I noticed them on the menu I knew that I had to give them a try.

Even though I eat tons of meat I felt bad about eating lamb for some reason, but Poco Loco serves free range lamb that are never tethered or raised in confinement, so at least I know that the lamb I ate that day probably had a pretty sweet life before it ended up in my tacos.

I’m not sure if it was the fact that the lambs served by Poco Loco are raised in a nice wide open pasture or if it was just because I’m so used to only having the choice between chicken, beef and steak at most Mexican restaurants, but these were some of the best tacos I’ve had in recent memory.

I’m not a big fan of sweets, so when it came time for desert I originally passed until the waitress told me about the Poco Loco Banana; a deep fried banana covered in chocolate sauce, cinnamon, whipped cream and a strawberry that was cut to resemble a flower. “You had me at ‘deep fried'” I replied to her as I immediately ordered one, along with another margarita. The banana ended up being the second good lunch decisions I made that day, and was the perfect way to end my meal. 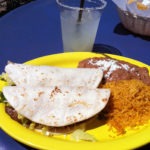 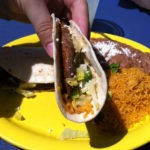 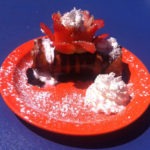