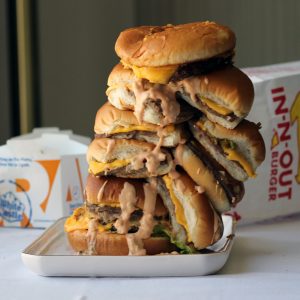 At In-n-Out you can order your burger a ton of different ways  — Animal Style, Protein Style, etc. — but I prefer to do mine White Castle Style, which is where I take an In-n-Out Double Double and stuff it with 8 White Castle sliders.

Now, you obviously can’t just walk into In-n-Out and order this amazing combo, but if you happen to be out in Las Vegas like I was a couple weeks ago where they’re lucky enough to have a White Castle and and In-n-Out a mere half mile apart on the Strip it’s suddenly completely possible.

It all started when I woke up on day number four of a five day vacation. The previous 72 hours of non-stop gambling and drinking had finally caught up with me and I knew that the only thing that was going to make me feel better was some fast food, The only problem was that I couldn’t decide between White Castle and In-n-Out. Then I remembered that I was in Las Vegas — the city of excess — so I figured what the hell, I’ll do both!

So, I sauntered down from my room at Paris, grabbed a quick Jack and Coke and headed North towards the Casino Royale where White Castle is located. I made a couple short detours to The Cromwell and Harrah’s along the way for more drinks, and a mere 20 minutes after I set out on my trek I was standing at White Castle ordering a bag of deliciously greasy sliders.

Once I had my sliders I grabbed another drink, made my way to the Linq Promenade where In-n-Out is located and ordered a Double Double plus a couple extra sides of Animal Style spread. Next up were stops at Stage Door and Bally’s — for more drinks of course — and by 11:30am I was back at my hotel, full of burgers and whiskey and feeling great!

Completely unrelated, but funny story: I was losing so much money on the roulette tables at the Linq — seriously, I’ve never placed so many losing bets in a row in my entire life — that I took a break to sit at a bar and play video poker and I told the bartender that I’d probably have a better chance of getting struck by lightening than placing that many incorrect bets in a row again. Her reply? “My friend actually got struck by lightning while she was walking her dog and she died.” Thanks Charlotte… Way to be a Debbie Downer….