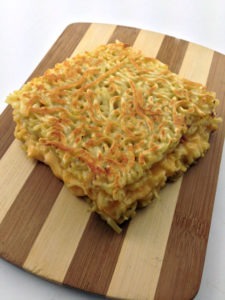 Alright, so people have made Ramen Burgers and Ramen Tacos, but what about a Ramen Grilled Cheese Sandwich?

All I could find through some Google searches were grilled cheese sandwiches that had ramen noodles inside of them, yet still used bread on the outside. What I had in mind for mine was quite the opposite however, I wanted my ramen noodles to act as the bread, just like they did with the Ramen Burger.

I started off by cooking up a batch of ramen noodles according to the directions on the package. Once they were done I drained out the remaining water, let them cool and then mixed an egg in with them.

I then dumped the noodles onto a cutting board and spread them out until the pile was about a half of an inch thick all the way around. After that I cut two bread-sized square pieces of ramen out of the pile using a knife and placed each one between two pieces of wax paper and put them in my refrigerator.

About 20 minutes later my newly created ramen noodle “bread slices” were holding together quite nicely so I took them out of the refrigerator and threw them into a pan on my stove where I heated them both up for a few minutes each on one side. Then, I flipped one of them over, added a couple slices of cheese, added the second one on top of it and just finished frying them like you would with a regular grilled cheese sandwich.

When my Ramen Grilled Cheese was finished the noodles ended up nice and crispy on the outside, yet still soft and noodle-like on the inside. In a way ramen works almost better than bread in a grilled cheese because when the cheese melts it sort of fills in all the little nooks and crannies between the noodles.

The sandwich actually would have been a lot better had I added a couple more slices of cheese since so much of it just sort of absorbed into the ramen, but either way, it was delicious! 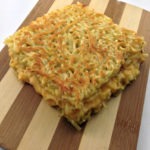 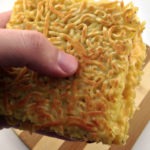 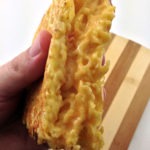