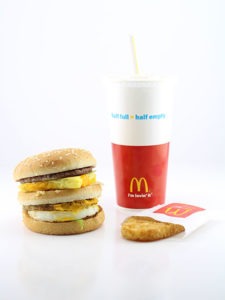 Two weeks from today McDonald’s finally starts serving an all day breakfast menu nationwide. Now, as awesome as it is to be able to order a Sausage McMuffin for lunch or a Steak, Egg & Cheese Bagel for dinner what I’m looking forward to even more than that are the new sandwiches that will inevitably come along with it at some point.

So, without further ado, here are a few new menu items that combine both breakfast and lunch ingredients that I’d like to see on the McDonald’s menu. 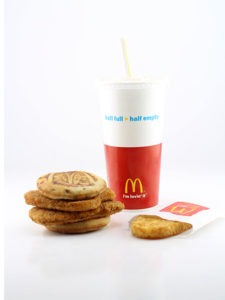 ed and one that’s more similar to what you’d normally find on an Egg McMuffin — plus lettuce and special sauce on a sesame seed bun.

McDonald’s actually serves something similar in Japan already called the Mega Tamago, which is a Big Mac with three meat patties, bacon and an egg, so I could definitely see it added to their menu here as well.

It’s no secret that chicken and waffles are an amazing combination so the sandwich pictured to the right seems like an obvious slam dunk for McDonald’s. 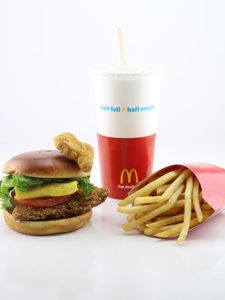 breaded McChicken patties with warm, maple flavored griddle cakes. If you’re feeling extra hungry you could even make yours a double like I did!

It was the Greek philosopher Aristotle who questioned which came first, the chicken or the egg, and honestly, who cares what the correct answer to his question is when you can have them both in this next sandwich that combines a Premium Buttermilk Crispy Chicken Deluxe Sandwich with a fluffy, folded egg.

The crispy chicken breast filet could obviously also be swapped out for a grilled chicken breast if you’re doing the whole healthy eating thing, and the Chicken McNug 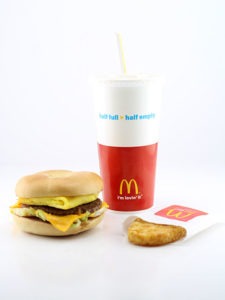 get that I used in my photo as a garnish for this sandwich is totally optional, but I sort of dig it. It’s like a cool little chicken top hat or something….

I call this next one the Breakfast Bagel Burger. It’s what you get when you combine two 100% beef patties with an egg and a freshly toasted bagel, or in other words when you add a McDouble to one of the breakfast bagel sandwiches that McDonald’s already offers.

Actually, even minus the egg I wouldn’t mind seeing any of the burgers from McDonald’s served on bagels. Plus as long as we’re talking bun options I’d like to see a pretzel bun offered as well, but now I’m sort of veering off course…. 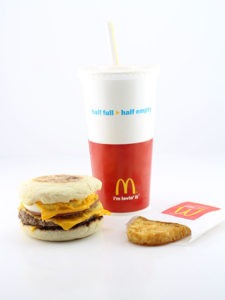 Technically you can already order the Mc10:35 — pictured to the left — as it’s been sort of a McDonald’s secret menu item for years now, but to do so you have to show up right when the breakfast / lunch crossover is happening and hope that the location you’re at will either combine an Egg McMuffin and a McDouble for you or sell you both of them at the same time so you can do it yourself.

Or who knows, maybe they’ll try to be hip like In-N-Out and do some sort of secret menu that isn’t really a secret at all kind of thing and just throw the Mc10:35 on that instead of having it on their regular menu. I mean, that’s sort of already where this sandwich is at, except that right now there’s only really a five minute timeframe per day that you can even order it. 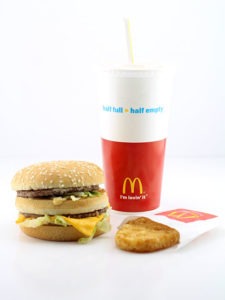 Like the different bun choices I mentioned earlier how awesome would it be if you had your choice of sides  — aside from the lame apple slices that are the only other option right now — with your meal at McDonald’s? It’s like when you go to a diner and order a burger and they give you a choice of fries or hash browns along with it.

It’s not that I’d always necessarily want hash browns in lieu of fries with my Big Mac Extra Value Meal — not all the time anyway because let’s be real here, McDonald’s fries are pretty great and ridiculously addicting — but the option would be nice. 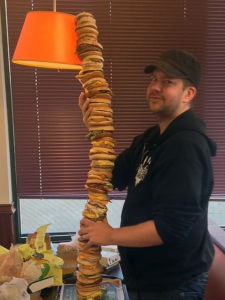 Alright, I’m just kidding about this one because even though you technically will be able to order the McEverything any time of the day at McDonald’s once their all day breakfast begins I definitely wouldn’t recommend doing so unless you want everyone in line behind you in line to be extremely upset with how long they have to wait for their food while the staff is working on your 54 sandwich order.

Actually, they have even more sandwiches now than they did when I originally created this monstrosity two years ago, so at this point it would probably be even more ridiculous.

Will any of these sandwiches actually make their way to the McDonald’s menu? Only time will tell, but at the very least you’ll be able to create them yourselves by ordering a couple sandwiches at the same time and combining them. It’s definitely better than what I had to do for this blog post which involved showing up towards the tail end of breakfast service, ordering a bunch of food and then looking like a total weirdo when I walked back in 15 minutes later and ordered a ton more.