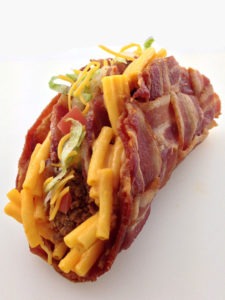 Even though I wrote about it almost a year ago, my Bacon Weave Taco post is still one of the most popular stories here on DudeFoods. I’ve done a couple different variations of it since then, including a Bacon Weave Choco Taco, but none of them have been quite as ridiculous as this most recent one.

I was recently asked to be on a local show here in Milwaukee called Studio A, and during filming they wanted to stop at my house to check out the whole food making process. They asked if I could create a new dish to show to their audience and mentioned that they like my original Bacon Weave Taco post and thus the Double Decker Mac & Cheese Stuffed Bacon Weave Taco was born!

Now, I’m never one to shy away from making foods that are as crazy as possible, but with this one I thought that I might be overdoing things a bit. One Bacon Weave Taco is absolutely delicious, but would two of them — stuffed with mac and cheese — be overkill? As soon as I took a bite my doubts were instantly erased. It was amazing.

So where do I take the Bacon Weave Taco from here? I honestly have no idea. At this point I think that it will be pretty much impossible to top the Double Decker Mac & Cheese Stuffed Bacon Weave Taco, but who knows. Now if you’ll excuse me, I’m off to get my cholesterol checked…. 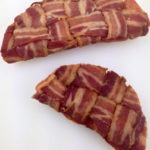 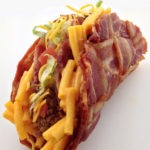 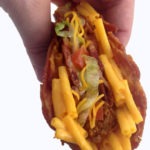