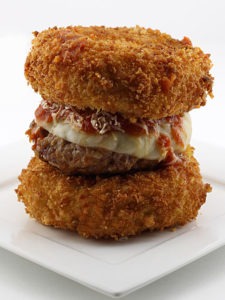 A few weeks back I attempted to make a taco that had a shell made entirely out of spaghetti noodles — it was a miserable failure. On the plus side, when I couldn’t figure out what to do with the leftover spaghetti I decided to make this Deep Fried Spaghetti Bun Burger.

To create the buns I just flattened out some cooked spaghetti noodles between two pieces of wax paper and put the sheet of spaghetti in my freezer. After about an hour I took the noodles out, put an upside down glass over them and traced around it with a knife to cut out two spaghetti discs. I then coated each one with flour, dipped them in an egg wash, covered them in Italian style breadcrumbs and then dropped them in my deep fryer — which was set at 375° — for about a minute and a half.

Once my deep fried spaghetti buns were ready I took a half pound of Italian sausage, formed it into a patty and threw it onto my grill. To finish things off I topped the burger with mozzarella cheese, marinara sauce and finally some freshly grated Parmesan that I received in the mail recently from Sartori, which is an amazing cheese company from here in Wisconsin.

I originally planned to make this burger a double, but I’m glad I didn’t because if I had it would have been damn near impossible to eat with how tall it would have been. I’m also pretty sure that this is the first time I’ve ever decided that one burger patty was better than two, but when that one patty already weighs a half pound and you sandwich it between two deep fried spaghetti buns that are each an inch tall you realize that a second patty is pretty unnecessary.

Even though this Deep Fried Spaghetti Bun Burger was amazing and I’m sure I’ll probably make another one again soon I’m still not giving up on the spaghetti noddle taco shell plan. In the meantime though this brought on another idea — Spaghetti Crust Pizza! 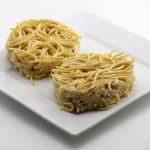 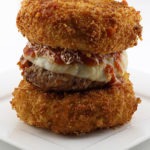 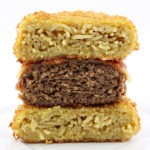