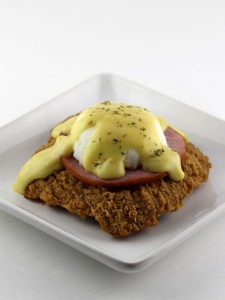 If I owned a restaurant I’d have an option on the menu where for an extra $2 you could turn any item into a Benedict. Bacon double cheeseburger? Why not top it with a poached egg and some hollandaise? Club Sandwich? Make it a Benedict for only two bucks more!

I can’t think of a single thing that wouldn’t benefit taste-wise from this. The one issue I could maybe think of would be if the food you wanted to top contained a sauce that didn’t mix well with hollandaise, but as I found out when I made Poutine Benedict, it even goes fairly well with gravy so who knows.

This idea spawned the way most ideas for my blog do — I couldn’t decide what I wanted to eat so I just started combining things that I found in my kitchen. In addition, I drank way too much whiskey the night before, slept a little too late and completely missed breakfast — which is my favorite meal of the day by far —   so at the very least I wanted something that involved eggs. At the same time though I also had a couple chicken fried steaks that I’d been meaning to eat. It was at that moment that the Chicken Fried Steak Benedict was born!

Like pretty much every single thing I make and write about here on DudeFoods you shouldn’t really need instructions on how to recreate this, and if you do then you’re most likely not cut out to make anything at all in the kitchen and you should probably just stick to eating gas station hot dogs and cereal for every single meal. The best part about my Chicken Fried Steak Benedict — aside from how amazing it tasted —  is that it even helped with my splitting headache! Actually, now that I think about it, it seems a little more likely that the beer I drank along with my meal was what really helped with the hangover….