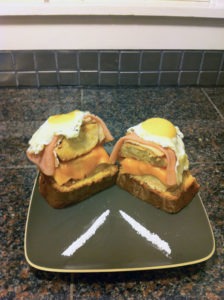 I started off by taking two boneless, skinless chicken breasts and cooking one in a mixture of vodka and spices (Vodka Chicken), and the other in tequila, lime juice and cilantro (Tequila Lime Chicken). Once the chicken breasts were done I placed them on top of some beer bread that I made using a mix I bought from Sprecher Brewery. I then topped the chicken breasts with some smoked ham and smoked turkey (have you ever seen how much Charlie Sheen smokes!?) and also added some sharp cheddar cheese because Charlie seems like such a sharp guy.

Since Charlie’s outlook on life always seems to be so bright (or sunny) I decided to top the sandwich with a couple sunny side up eggs. After that I added a couple lines of powdered sugar to the plate and ate my dinner. Aside from being absolutely delicious this sandwich also turned out to be quite large. You might even say that it’s almost big enough for the appetites of two or even Two and a Half Men! Another possible name for this sandwich? “Winner Winner Charlie’s Chicken Dinner.” 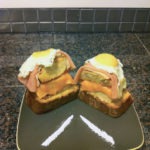 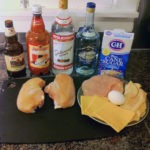 6 Comments on The Charlie Sheen Sandwich