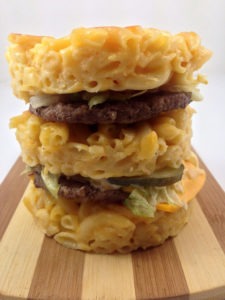 Back when I made my Macaroni and Cheese Burger Bun one of my Twitter followers who goes by the name Oz Ravenheart mentioned that it put a new spin on the term “Big Mac” if the “Mac” part of it stood for mac ‘n cheese. Well, that gave me an idea!

Now, the original burger — with only two macaroni and cheese buns — was already a little difficult to eat, but definitely doable. This one on the other hand? Not so much….

The problem lies in the fact that a Big Mac — Especially one with macaroni and cheese buns — is fairly tall, which in turn means that you need to press down on it when taking a bite causing the macaroni and cheese buns of start falling apart. Eating it while holding it with two hands still sort of worked, but when I’m enjoying a burger I always sort of prefer to use just one. On the plus side, there’s a really simple solution to the problem — deep fry the entire thing and serve it on a stick! 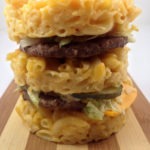 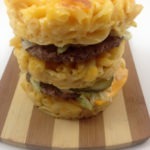 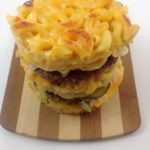