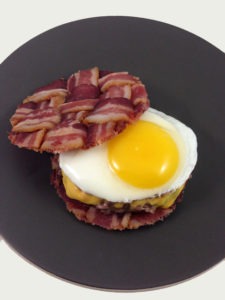 It’s been a good couple months since I’ve utilized the bacon weave in my cooking, and seeing as how the nice folks over at Hormel just sent me 18 pounds of their new Black Label Cherrywood Thick Cut Bacon I figured that now would be as good a time as any to get back into it!

So, I opened up a couple packages of bacon, created a couple square bacon weaves and then put them in my oven at 400° for about 20 minutes. Once my two bacon weaves were done I placed an upside down bowl over each one and traced around it with a knife, thus creating the two circular bacon weaves that I needed for my “bun.”

After that was done, I grilled up a 1/3 pound ground beef burger, melted a slice of cheese on top of it, added a sunny side up egg to the equation and I had myself a nice little Bacon Weave Breakfast Burger!

Normally when I make something with a bacon weave I’ll use a thinner cut of bacon because with something like Bacon Weave S’mores or a Bacon Weave Elvis Sandwich you want the bacon to compliment the dish, not completely overtake it, When it comes to a nice, juicy burger though you can always use more bacon so in this case the thick cut bacon worked out perfectly.

Oh, and based on the amount of bacon I have left I think it’s a pretty safe bet that you won’t go another two months without seeing another bacon weave creation from me…. 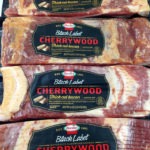 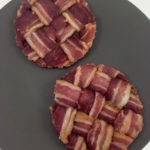 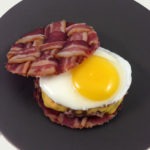