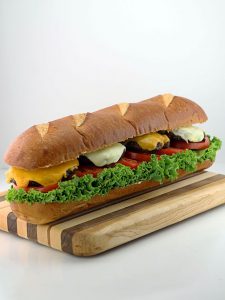 I’m always conflicted about the time of year when summer turns to fall. Living here in in Wisconsin it means that within a few months we’ll be seeing snow, which is never fun, but on the other hand it also means that it’s time for football season!

The Cheese & Burger Society is currently running a pretty amazing contest where you can win an all-expense paid trip to one of this year’s Green Bay Packers games. If you win not only will you receive airfare, a two-night hotel stay and two club level tickets to a game, but you’ll also get pre-game sideline passes, two Green Bay Packers jerseys, a $500 Mastercard gift card and a $100 voucher towards food and beverages at the game. Even if you don’t win the grand prize though they’re also giving away $500 Packers Pro Shop gift cards to three second place winners as well as $250 Pro Shop gift cards to eight third place winners. It doesn’t get any better than that!

To help spread the word about this contest they’ve asked me to create a football-themed burger that uses plenty of delicious Wisconsin cheese, and that’s what inspired the 4th and Long Burger! It’s got four 1/2 pound ground beef patties each topped with a different Wisconsin cheese.

With how many great cheesemakers Wisconsin has narrowing it down to only four was actually a little tough, but in the end I went with Cheddar, Colby, Fontina and Gouda since they all have pretty low melting points and in turn work really well on burgers. In retrospect though I probably just should have referenced a touchdown in the burger name so I could have used seven different cheeses on it.

Want to try the 4th and Long Burger for yourself? Just head over to WisconsinCheeseTalk.com for the recipe, and as I mentioned earlier, don’t forget to enter the contest! 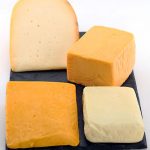 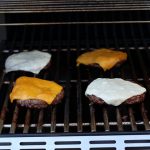 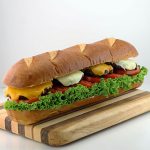